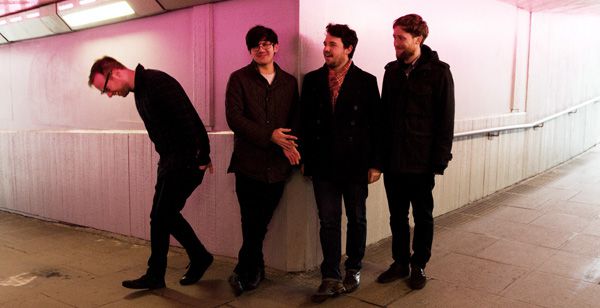 Tellison are one of those bands you can’t help but like, a down to earth bunch of lads who sure do know how to have a good time…especially when they head out West. We caught up with frontman Stephen Davidson ahead of their Bristol gig and slot at Gloucestershire’s 2000 Trees festival.

With a surge of bands opting for awkward generic names, it’s refreshing to come across a band with an original name like Tellison, but just what does it mean? “It’s the surname of a man whose life story is very good. That’s all you’re getting on that, we want to keep it a bit of a secret. We picked it because we liked it and we wanted a band name that could just be us. It has good Google ability. A lot of bands I liked at the time we formed (2003) went for one-word names.” Stephen told us.

He continued: “We did not come along on a zeitgeist. We came along at the end of British rock with bands like Hundred Reasons, then bands like the Strokes came along and the Libertines. The music we do and the people we know puts us in the punk rock UK set with bands like Gallows but we have also played with much more folky people like Noah and the Whale. “And some of my favourite bands are from the US, like Pedro The Lion and Osker. We have always ended up on the periphery.”

Tellison came to the region last year as the touring support for Get Cape Wear Cape Fly and are looking forward to a trip back to Bristol as part of their UK headline tour. Stephen said: “Last time we played Bristol Thekla, which I love, we had a bit of a tour blowout, which ended with four bottles of empty rum and a half gutted pineapple. We’re looking forward to round two when we come back. We also had a soujourn (my new favourite word – meaning little trip) to Cornwall, which was nice. And we visited the Burrow Hill cider place in Somerset. We have played a lot of shows in Yeovil too. I love Yeovil. When our first record came out we got Ben Wood, from the Yeovil band Encyclopaedia, to play with us on tour – keyboard and extra guitars etc. so we had some good times in Yeovil, at Yeovil Town Football and Acorn Records.”

He added: “I love the whole South West thing. I grew up in Scotland and was very aware of London being this great place. I like how people are happy to live in the South West, it’s not like the rest of the country.” Sadly, there are no Yeovil or South Wales dates on this tour, though Stephen told us they’ll be back. He continued: “The business model for being in a band of our size in America is completely different. You can spend six months touring all the States and then do it again. It has that sustainability. In the UK, if you do a month’s tour, you have played everywhere and you can’t just start again as people will just say ‘you were here three weeks ago’.

Rolo Tomassi remixed Collarbone for Tellison after they played together at the Camden Crawl, but they’re no strangers to the remixing game themselves. “We did a remix version of the first album,” said Stephen. “Henry did a remix of Hospital. I’m always interested to see what comes out of Henry’s mind because he’s a very smart guy. He went away with a lap top and re-emerged with this brilliant remix. Remixes justify you listening to your own music. When you listen often you end up criticising it.

And Henry’s creativity isn’t confined to music, he came up with the distinctive idea for the Wages Of Fear album cover. Stephen said: “A lot of people think it’s Pete on the cover but it’s not. It’s a boy called Mario. We were talking about album artwork and Henry was really quiet, we said we think this is a good idea and Henry just said ‘no, this is what it’s going to be’ and went away and did it. George Garnier, a fashion photographer. Took the photo and we were really pleased with the result. Album artwork is important. In a lot of cases you will only see it on a thumbnail on a website or in a magazine so you want to have something that is going to be recognisable – something like Bandwagonesque by Teenage Fanclub.”

But it’s not just artwork, Tellison put a lot of effort into their videos and their Internet presence. “Videos are also important,” said Stephen. “If I hear a band I will always watch the video first. I’m interested to see what bands look like, to see what their sense of humour is like. Bands like the Beastie Boys and the Foo Fighters do great videos. They’re not just guys throwing shapes and showing off. I saw Stamp by Rural Alberta Advantage and it made me fall for the band.

“I think blogs are great. I love that it’s a real leveller of the playing field. There’s something about putting opinions into print, virtual or physical, that makes them seem more like opinions. Sometimes it’s the NME versus thousands of bloggers. We have always used the Internet. Even when we first toured, we booked it all by email. It also helps us meet our fans. I don’t think there’s much of a line between band and fan – everyone is just a person. If people come to a show and say hello, I approach it as if I’d just met someone in every day life – as a way of meeting people with similar interests. I like making friends.”

Catch Tellison at Bristol Croft on Wednesday July 29, tickets £6, doors 8pm. And at the sold out 2000 Trees Festival in Gloucestershire on July 15 (if you’ve got your ticket already obvs).