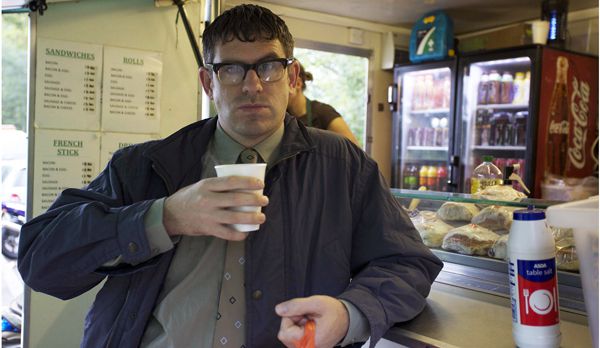 You’ve got to commend the organisers of Bristol Comedy Garden for pulling together an exceptional line up of wonderfully diverse comedians, and the second night of the festival was possibly the most eclectic mix of funnymen yet. The only thing which would’ve made it better would have been the inclusion of a woman on this bill, but hey I’ll put my feminist hat back in the box for now.

First up was our compere for the evening Craig Campbell. The thing about comperes, which he touched upon, is that some people view them as somehow inferior to the headline acts but I (and indeed he) would argue that their have a tougher job. Not only do they have to deal with these preconceptions but they inevitably end up with more stage time, and those times are the parts when everyone’s gagging for a drink or a pee.

Campbell was brilliant. His shouty Rhod Gilbert-esque persona complimented his grumble-led gags perfectly. He enjoyed a bit of audience banter with a fellow Canadian and showed off his local knowledge with tales of Bridgwater, Stroud and South Wales. And with a voice bigger than Snowdonia he was the perfect person to introduce the other acts and gee up the crowd.

Stewart Francis was next up, which I found odd cos he was certainly the biggest draw for me and he proved to be the best act of the night. His one-liners were mostly hit, with just a sprinkling of miss. He employed the fairly predictable subject matters of jobs, relationships and stereotypes all pinned together with impeccable word play. ‘I watched a programme on how boats were put together the other day…riveting.’

But he’s also gone a bit darker with his material and slipped in a couple of jokes which would make fellow Mock The Week panelist Frankie Boyle proud, randomly throwing in the comment ‘my Uncle ejaculated on me once…phew, glad to get that off my chest.’ There was a slight microphone malfunction mid set and Francis proved he’s as good as improv as he is pre-prepared one-liners, joking that the second mic was funnier than the first. His set was more than a laugh a minute, it was a laugh every 10 seconds.

Shooting Stars funnyman Angelos Epithemiou sauntered on next with his high waisted trousers, uber long tie, stained raincoat and plastic bag. I wondered just what his set would entail – thinking there’s a limit to character-based comedy in a stand up capacity but I needn’t have been worried. He employed a mix of basic slapstick (hitting himself on the head with an inflatable hammer), musical comedy (a spoof take on Baz Luhrman’s 90s hit Wear Sunscreen) and some solid jokes (What’s the difference between a Kangaroo and a Kangaroot? One’s a bouncy Aussie marsupial and the other’s a Georgie stuck in a lift!). In the mumbled words of Angelos himself LMFAO.

Last but not least was Irish observational comedian Ed Byrne. He had a tough few acts to follow but he’s a pro and delivered, commanding much of the stage in a frantic Lee Evans kind of way. Much of his set relyied on that white middle class comedy which seems to be proving the mainstay of the British comedy circuit at the moment (Chris Addison/Jimmy Carr/Michael McIntyre etc). He talked about age inappropriate clothes for kids, fatherhood and being a geek at school. One of the highlights was his tales of losing luggage at an airport, where he joked he now asked the airport staff whether they packed his bags themselves or left them unattended. Brilliant.

Bristol Comedy Garden is a stroke of genius. Many of the comedians acknowledged Bristol as a great comedy city and the fact that there were very few empty seats for this £18 a ticket gig goes to show just how receptive we are to a top notch line up of funny folk. The festival runs until Saturday July 23. More info at www.bristolcomedygarden.co.uk