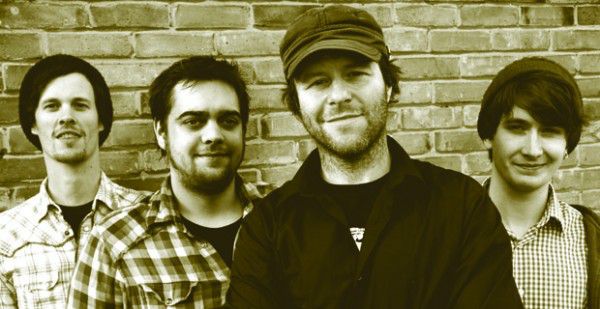 So, tell us about yourselves…
DJ: We’ve been together for about five years, the first year didn’t mean a lot to us because I was in Once or Twice at the time and John and Simon were doing really well with No Comply, but when both of our bands split, thankfully the result of that was Crazy Arm. Our music has definitely progressed over the course of five years.

You can hear how your band has progressed when comparing ‘Union City Breath’ to your first record…
DJ: It’s nice to hear you say that because it was a worry that we could either be re-treading old ground or it could have been too much of a departure. We have a country, folky thing because I began using my own acoustic songs within our set and it has now become part of our sound. I hate using the word organic, but the progression of our sound is organic and who knows where it could go.
JD: On this record we’ve taken the folk, rock and personal aspects of our music and pushed them further.
DJ: Yeah, we found a new confidence because it has been embraced by our fans, and now that we have a more established and wider fan base over the country and in Europe we felt that these country and acoustic influences could now be brought to the front.

What else is new?
DJ: There’s a lot more instrumentation and Vicky Butterfield, who has sung on stage before is singing on four or five songs alongside me, which is nice. We also have Patrick James Pearson on keys and the fiddle. People ask if we are pressured to match our first record but we aren’t, we want to make a great record to please ourselves and we didn’t just want to re-create our first record.

You’ve been hot on the touring scene; have you had any bad experiences live?
DJ: The only disappointment that we’ve had is when we didn’t get to support the Against Me tour. We toured with Frank Turner last year and we did Reading, Leeds and a whole bunch of festivals. We then got the offer to support Against Me, a band that we really admire, but they then cancelled it because of some serious issues with their record label which we found out about later but at the time nobody knew about. It was the biggest disappointment. It was still the best year ever but I really wish it had happened; we would have been able to play in countries we had never played before like Spain, Norway and Italy. But they’re back together and have a tour planned so fingers crossed!

And finally, as a punk protest band, what are your thoughts on the current music industry?
DJ: I’m old fashioned with this stuff and I’m unable to follow the trends because I’m just not interested. The music industry is obviously suffering as a result, but it’s never bothered me. I’m proud of the songs I write rather than my bank balance, so when the industry hacks are up in arms about people downloading records I just think “Well, I never cared about you in the first place, why should I care about you now?”

Crazy Arm’s second album, ‘Union City Breath’, is scheduled for release on October 10, Xtra Mile Recordings, on CD/digital and 12″ vinyl will be available through their European label, Gunner Records. The lead song from the album, ‘Tribes’, is downloadable now. This month you can see Crazy Arm at Ivylive Festival on the 9th, Plymouth Punks Picnic, Nowhere Inn, on the 11th and The White Rabbit, Plymouth on the 23rd. In October you can catch them at the White Rabbit, Plymouth on the 22nd.
Visit www.myspace.com/crazyarm or www.facebook.com/thecrazyarm