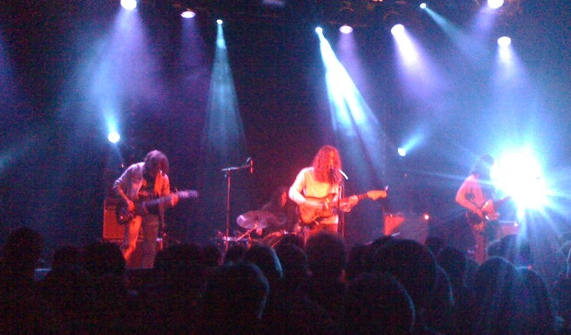 When everyone’s doing their top 10s at the end of the year, it’s pretty likely the name Kurt Vile will feature fairly heavily. Smoke Ring for My Halo, the Philadelphia singer-songwriter’s second full-length since signing to Matador in 2009, is a near-perfect blend of Springsteen-esque songwriting with instrumentation that swings from minimal acoustic sounds to the post-grunge fuzz we’ve seen a lot of in 2011.

From the healthy crowd gathered at the Fleece for his first Bristol show with backing band The Violators it’s evident Vile has already made an impact. Support act Woods set the tone, channeling Neil Young and Crazy Horse as they warmed a very fuzzy stage ahead of our headliner’s set. Heavy on vocal hooks, their opening bracket of tunes veered toward the quirkier areas of indie-pop and offered nothing new but as their set developed and their amps heated up, the vocals gave way to reverb-drenched guitars that left a far better impression.

After momentary acoustic respite during opening number Blackberry Song, Vile gradually ratcheted up the tempo, the volume and the intensity of his show to surpass everything Woods had done before him. Peering out from under a mess of hair, the former War On Drugs guitarist eased through the casually understated Runner Ups and slick guitar pop of Jesus Fever but at the kind of volume that leaves the song imprinted on your ear drums the next morning. And then there were the denser sounds of Society is My Friend and Freak Train, which, after stepping back and regaining consciousness, had you realise why his three bandmates call themselves the Violators. Apt.

Despite the relative success of Smoke Ring, Vile’s setlist for Bristol had surprisingly little room for its tracks: the inclusion of louder and heavier tracks such as Hunchback and Freak Train came at the expense of Baby’s Arms, Puppet to the Man and the album’s title track, in keeping the theme of the night. Perhaps at one of his solo shows you might see more of a bare-bones Kurt Vile, feedback-free, unplugged and heart on sleeve; but here was a man completely comfortable as part of a band and more focused on the content’s delivery and its effect than the content itself. An impressive performance from an impressive talent – here’s hoping he’s back soon.