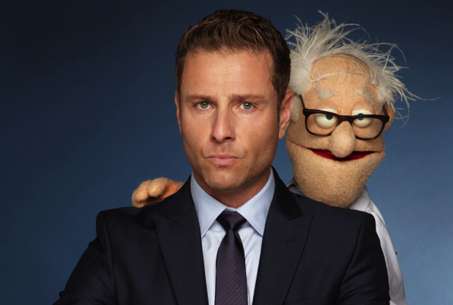 Okay, I am going to be completely honest – whilst I’m not really an expert in many things, I can qualify myself as completely redundant of any knowledge or experience with ventriloquism. This fact alone made my journey to The Princess Theatre Torquay a little nerve-wracking as the taunting sounds of Keith Harris and Orville’s ‘I Wish I Could Fly’ circled around my brain space. However, with an open mind I ventured onwards and for this I was rewarded.

It would be too simple to label Zerdin as just a ventriloquist act; it cannot be denied that Zerdin has developed a seamless skill in performing as a ventriloquist and is completely convincing in his portrayal of his characters of Sam, Grandpa Albert and Baby. However Zerdin pushes that skill further and ventures into the realm of the stand up, the sit-com and the observational comedian as well as that of the ventriloquist. Zerdin’s jokes about a toddler’s inability to avoid insulting strangers and that awkward moment when a baby picks up a swear word in conversation were amusing and easily accessible observations and it was Zerdin’s ‘solo’ stand-up routine about his life as a ventriloquist were some of the wittiest jokes of the entire performance and were easily my favourite. Whilst the only element of the show that fell short for me were the easy, toilet-humour gags however, in defence of Zerdin, these jokes were clearly not for me but instead the younger members of the audience who were rolling around in the aisles – proof that Zerdin ensures that everybody who comes to his show will have a reason to laugh.

Zerdin’s use of technology thrusts ventriloquism into the laps of the Twitter-worshipping age and was not only a relief for me but also a marvel. Zerdin pulled two unsuspecting audience members up on to stage and transformed them into human puppets by donning them with remote-controlled masks which was truly a stroke of genius and had every member of the Torquay audience crying with laughter. Zerdin also completed the show with a sing-song finale in which Sam, Grandpa Albert and Baby moved, danced and sang whilst Zerdin was absent from the stage; Albert’s rap being a special highlight.

All in all, Zerdin could best be described as the Gok Wan of the variety industry; he performed the seemingly impossible act of transforming that archetypal ventriloquist stereotype into one which was now cool, truly entertaining and bloody hilarious.