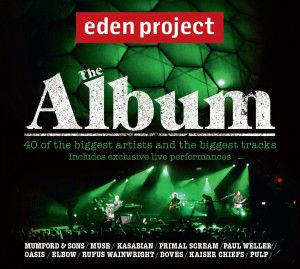 The Eden Project and Warner Music are releasing a 2-CD compilation of music by artists who have played at the Eden Sessions to mark the tenth year of the iconic gigs. The collection includes tracks recorded live at the unique Cornish venue by The Doves, Paolo Nutini and Mumford and Sons. The double album documents the early days of the Sessions with tracks from Pulp, Elbow and Beth Orton, moving through to more recent headliners such as Muse and Kasabian.

Tim Smit, Eden Project Chief Executive, said: “Music is central to Eden’s culture as it brings about unforgettable moments of community togetherness and, by extension, a sense of inspired optimism that fires all that we do. Bands who played support slots at the Sessions are well represented too, highlighting Eden’s history of booking the hottest acts as special guests. Mumford and Sons, Mark Ronson, White Lies and Villagers are all featured. Cornish acts are well represented by singer-songwriter Ruarri Joseph and nu-folk outfit Crowns. Tim Smit says, “The seduction of music introduces new audiences to our work and, by association encourages people to get involved with us. Ultimately, alongside these reasons, it would be a crying shame if possibly the best open air arena in the world wasn’t able to host night after night of magic – and it has and long may it continue to do so.”

Eden Project – The Album is out now and is available from retailers and the Eden Project’s online shop at www.edenproject.com