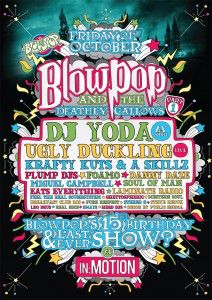 Blow Pop has been the longest running night in Bristol, spanning 15 years, bringing the cutting edge of electronic music and some of the biggest names in the electro/house/hip hop music scene. So, it was no surprise to see that they were celebrating their 15th birthday at Motion, with a line-up that included big names like DJ Yoda, Ugly Duckling and Plump DJs, all of whom were named as headliners (only in club nights can you have more then one headliner!).

I managed to get there just in time to see DJ Yoda do his audio visual set. DJ Yoda does what DJ Yoda does very well – mixing audio and visuals together. Starting off with his typical intro referencing Star Wars and decending into his almost stereotypical cut and paste style, if you have seen him once then you have seen him a million times and after a while it loses its WOW factor, but I suppose, if the machine aint broke then no need to fix it.

The same could be said about Ugly Duckling in the ‘if it aint broke then dont change it’ attitude. But boy are they good, taking old skool styled hip hop beats, referencing stuff like Jurrasic 5 and the Sugar Hill Gang whilst coming out sounding like an overly sarcastic Beastie Boys. They’re definitely not a band who like to take things too seriously. Who cares that they have been doing pretty much the same thing for 18 years – it is so much fun. It’s proper hip hop, minus all the blinging or bragging about being the best at anything. All of their raps resemble old school party vibes and near constant stoner jibes, encouraging crowd participation, getting the entire crowd jumping or shouting out 1-2-3, or whatever chorus lyric they are trying to get us motivated by.

Each one of the grooves lays the thick old skool funk of Young Einstein over MCs Andy Cat and Dizzy Dustin’s lyrical party flows, with sprinkles of added sarcasm – cue the track where they pull and unsuspecting girl from the audience and perform a rap about dodgy chat up lines that have failed to impress, before getting the girl too choose between the two MCs. It was very much Old Skool Tricks well complimented by Old Skool Licks!

It’s all kind of silly but ultimately good fun as they thank pretty much everyone and Blow Pop for supporting them over the past 10 years! I must admit that’s the main reason I wanted to go! I didn’t think that anyone could follow it, so I took a bit of a break, just to catch a breath, because if you have ever been to Motion (Bristol’s biggest club) then you know how breathless it can get!

I returned for Krafty Kuts who provided some seriously cheesy big bass and beats, even though some of his mixing was technical and well crafted at times with real precision, it did feel like as if he was mixing from a Now compilation mix tape, complete with an electro version of Blur’s Song Two. It was all perfectly fine and pretty fun until he decided to drop some dubstep (or Dullstep depending on what side you see things). At that point I decided to take another break.

I returned for the Plump DJs, who were, in my opinion, the best of the whole DJ line-up. m
Mixing smartly crafted deep house together with driving bleeps, with scrumptious atmospherics, which create almost trippy effects for the last of the revellers who have out stayed into the very early hours of the morning!