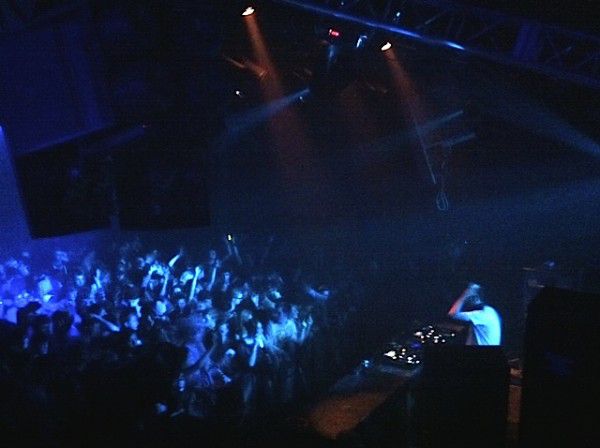 Anyone who’s been to London’s Field Day festival will be well aware its lineup is about as impossible to pigeonhole as a Beck album. So it was fitting, that for Field Day’s first Bristol event brought together an eclectic mix of music that kept revellers up until the early hours of a cold, damp November Sunday.

As punters trickled into the sparsely-populated main room, London-based knob-twiddler Jon Hopkins took on the challenge of filling the massive venue and succeeded despite playing without the visuals around which his compositions often wrap. Overrunning slightly, his set wove together a myriad styles and sounds and warmed the ears of the steadily-growing crowd.

If Hopkins greased the wheels, it was Hudson Mohwake who started the engine. Again, impossible to put in a box, the artist known by his fans as HudMo laid down a set that explored, confused and excited. Starting off mainly with his own material as though he was testing the waters, his fingers were constantly working away, chopping his creations up and rearranging them in completely unique fashion – a bit like a kid with a frog and a scalpel in a high school science class. As he progressed, he moved more towards his recent work on the Pleasure Principle label, which rearranges cheesy 1990s R&B into massive party tunes, as well as a nod to Warp Records stablemate Rustie with After Light, which may soon become laughing gas’s official theme.

While HudMo gave his masterclass in sound manipulation, Washed Out went for the opposite extreme and delivered a performance that shied away from their more synthetic influences and focused on the organic. In the past, Washed Out was very much Ernest Greene-and-band: anyone present during Washed Out’s first visit to Bristol (Dot to Dot, 2010) would know Greene is more than capable of performing with just a MacBook and a microphone. But from opening number Hold Out to set-closer Eyes Be Closed, this was a full band effort that offered a consistency absent in performances from other acts. Their billing on the venue’s largest stage warranted a fuller sound and as we saw on this year’s Within and Without LP, the ‘chillwave’ tag doesn’t do them justice; there’s a lot more to this band.

Erol Alkan, on the other hand, showed the kind of complacency you wouldn’t expect from one of the biggest names in electro today. We all know what he can do: a glance at his CV proves he’s as effective a producer as he is remixer and re-remixer. Some of the mixes floating about on the internet are so good it’s insane. But across his two-hour set he kept the drops to a disappointing minimum and worked his CDJs mainly to keep things ebbing and flowing in generic manner. The sole big moment came as he segued a cut from Daft Punk’s Tron Legacy score into his reworking of Metronomy’s The Bay. Impressively, as he held back on the latter, a simple movement of his hand had the entire crowd crouch down Prodigy-style before returning to their feet as he finally let loose. A massive moment to end an otherwise underwhelming set – disappointing, when you consider the calibre of performances earlier in the night.