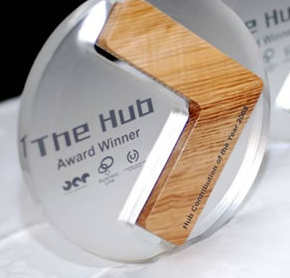 Cornwall’s smartest young entrepreneurs were recognised at the Hub Awards on Thursday November 24th at the Atlantic Hotel in Newquay. The Hub Awards once again rewarded those young business people making a real difference in Cornwall and celebrated the work of companies which have quickly made their mark in the county.

A panel of judges from across Cornwall’s business community came together to interview shortlisted candidates and later select the winners for each category.

Scooping the title of Employee of the Year was 26 year-old Becky Palmer. The judges were impressed by Becky’s beyond the call of duty approach as an employee for Hayle-based, Sapience HR. As Office Manager, Becky is often required to be the first point of contact for clients, but Becky went much further and in a little over 12 months introduced and implemented new systems and procedures and overhauled the company’s marketing strategy that enabled the business to provide valuable new services to their rapidly expanding client base.

This year’s Green Business of the Year award was handed to Redruth-based Piran Technologies. The judges commented upon how successful Piran Technologies had been at challenging the traditional accepted thinking of energy efficiency within the IT facilities sector both within, and most significantly outside of, their company.

27-year old Dan Parker scooped the award for Young Entrepreneur of the Year. Since setting up SMS marketing company, FireText, in September 2010, the business has in a short period of time grown considerably and won a number of significant contracts. Judges commented on how infectious Dan’s enthusiasm and passion was for doing business and how he would be firm member of Cornwall’s business community well into the future.

The Best Business Start Up award was won by Blackwater-based Cornwall Solar Panels. The judges were impressed at how quickly the founder, Tony Sampson, had been able to establish the company in the county having only set it up in November 2010. The business now employees ten people across two companies and is taking on an Unlocking Cornish Potential in January.

A special Hub Contributor of the Year Award was given to Anna Penrose from Mail Away. Anna was not only recognised as being a regular Hub attendee over the past year but for also playing her part in helping welcome new members.