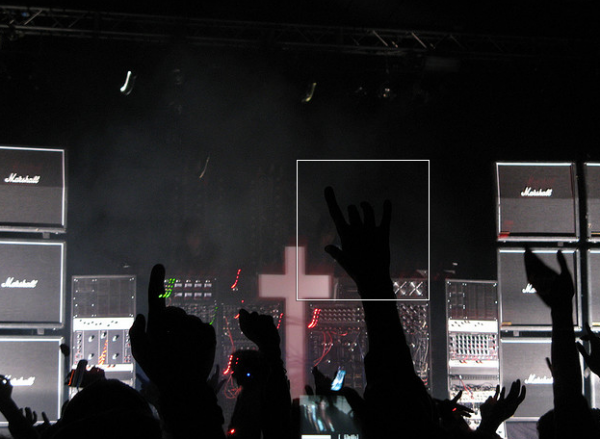 Through out the past 20 or so years, France has been at the forefront of electronic music, with the likes of Air and Daft Punk and too-cool-for-school labels Ed Banger and Kitsune bringing electronic music to the hipster masses.

So bring forth Justice. I definitely felt like a bit outcast when arriving at the Academy, as most of the audience looked like they had just walked off of a photo shoot for New Look, with their supper skinny fit Jeans and models’ hair cuts. I knew it would be full of this kind of crowd as Justice has an uber cool style about them, that was very prevalent throughout their debut album, which has been dominating many an indie dance floor from 2007 til today.

The warm-up act was a DJ set form French singer/producer DVNO (pronounced Divino) who, of course, appeared on the Justice single of the same name; it is the French slang for disco and that is pretty much what he hammered out. It was cool nouveaux glitch mixed in with elements of slow droning Kraut rock and cutting edge house. Him and his sombrero were doing their best to whip up the crowd, who seemed to be like the electro versions of Iron Maiden fans. I rarely get claustrophobia, but I sure as hell did tonight, as the crowd surged forward pinning me to the barrier. It felt like as is I was stuck in a Nathan Barley world, as more and more hipsters pushed forward making me feel quite ill.

Justice had one of the most impressive stage shows I have ever seen in the Academy. It was full of the sort of panache you would expect from a rock band, with a huge stack of lights disguised as Marshall amps and a huge computer database style cover, It was pretty impressive, but it meant that no one could really see what the Parisian duo were doing and, what little emotional depth the band’s music has, was washed away for the glam of the show.
Waters of Nazareth Sounded as fuzzy as ever, bouncing out the speakers as lights flashed in coordinated patterns syncopated with the 16th note rhythms, playing on disco’s simple 4 to floor aesthetic, layering them up with the kind of 3D scoped sound that artists like Ettien De Cresy have been pedalling around for some time, just fettering in a few extra sonic textures.

There is a nod to Mike Oldfield’s Tubular Bells, with the chiming lights in glass tubes that smoke. And they were almost verging on a homage to Daft Punk’s Robot Rock style pastiche and just doubling up the woomph. DANCE is one such momentum as they bring the set to a close, bringing everything to a furore by almost creating the sonic thrashings that would be more akin to Atari Teenage Riot – leaving most in the venue breathlessly relieved, or just like me a bit perplexed as to what they will do in the future…will they change their set up at all?