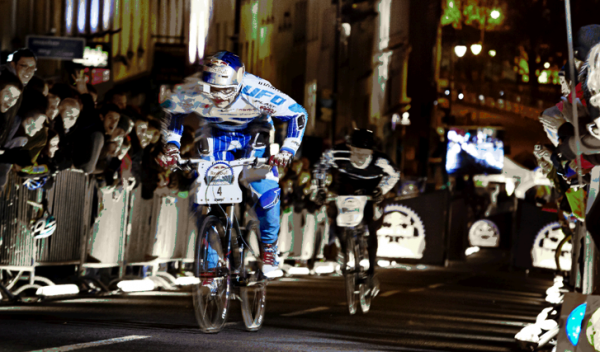 Britain’s Dual Up Hill Bike Challenge Returned to Park Street, Bristol on Saturday, 18 February, with 32 hardcore cyclists battling it out for the top spot.

Red Bull Hill Chasers saw 16 elite level bike athletes and 16 bike enthusiasts from BMX, mountain bike, road cycling and fixed-gear compete in a series of gruelling head-to-head knockout rounds on the unforgiving incline in front of a 6,000 strong crowd. Riders were paired randomly giving aspirant riders the chance to compete head to head against the 16 invited elite. The enthusiasts were made up of the fastest 16 riders from a qualifier, open to anyone, held on the morning of the event.

A random race draw for Round 1 saw a number of bike mad qualifier winners come one step closer to their dream by knocking out their pro counter parts. Riders battled bravely through the gut wrenching rounds and amazed the crowd of 6,000 with their pace.

Many of the competitors such as David Hynes( 28, Clifton) hailed from Bristol and Murray Roe (26) didn’t need to travel far as he lives on Park Street! One of the elite competitors, Multi World Champion and Red Bull Athlete, Michal Prokop set the fastest time of the day on his 4X mountain bike but ironically was forced to retire from the Quarter Final with a broken chain. He said: “This was a unique race for me. Where else can you compete against so many different bikes?! Even though my chain broke I still had an awesome time taking on the enthusiasts!”

In the end, there could be only one to take the crown from last year’s Champion, Charge Bikes Chris Metcalfe. And it was cycling enthusiast qualifier Ben Simmons who beat the elite riders with a blistering time. After getting his breath back Simmons said he was,” shocked and surprised” at his win, especially as he’d travelled to Devon earlier that day to take part in another cycling event! “I’ve never taken part in anything as short and punchy as this before in such a great location. Its so exciting. It’s a tough race and I never thought I’d win but hopefully I’ll be back to do it again next year.”