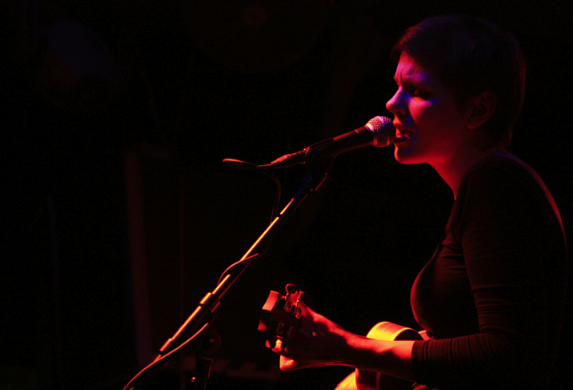 People say a lot about the ‘difficult second album’. How do you follow on from a commercially successful or critically acclaimed debut? Do you go back to the drawing board and reinvent yourself or do you resist tampering too much with a proven formula and end up blowing your recording budget on what’s essentially a tin of studio gloss?

On their return to Bristol, Anglo-Australian indie-pop outfit Allo Darlin’ are keen to show the Fleece crowd what they’ve been working on over the past year and kick off with three new tracks. They open with jangly new 7” Capricornia, before moving into a more subdued Europe, the forthcoming LP’s title track, and then on to 2011 single Darren, all of which omit the ukelele that threaded its way through the band’s brilliant 2010 debut. Singer Elizabeth Morris’ unmistakable antipodean tones ring out over a beefed-up sound that’s less twee and more nostalgic; the new record can’t come soon enough.

But while their fans are no doubt curious to hear their newest offerings, the sight of a leant-back Morris, uke in hand, singing the opening lines of The Polaroid Song up at the mic brings the feel-good factor with gleeful smiles and shuffling feet all across the room. And from there it’s more of the same as the foursome spend the next half-hour reminding us why we loved that record so much: “a song about stalking someone on the internet” (If Loneliness Was Art); boy-girl duetting with moustachioed Bill Botting (Dreaming); those oh-so-true lines about Paul Simon’s 1986 classic on My Heart is a Drummer.

That said, there is continuity throughout the remainder of the set, with just the right amount of new material dotted in amongst the old favourites. There’s Neil Armstrong, which doesn’t sound too dissimilar to Morris’ countryman, Paul Kelly, along with The Letter, which is another track sure to feature when the record is out. As the band draws towards the 11pm curfew there’s time for a nod to another Australian act, the Go-Betweens, a clear influence on tonight’s main act, with a cover of Tallulah, and as if a scrapbook of the band’s musical reference points isn’t enough, there’s a quick glimpse of their DVD collection on closing number Woody Allen.

So if tonight’s show is anything to go by, we can expect an album drawing from the same references as Allo Darlin’ but will offer a thicker sound, perhaps a little more laid-back and with less emphasis on the kitsch. May can’t come soon enough.