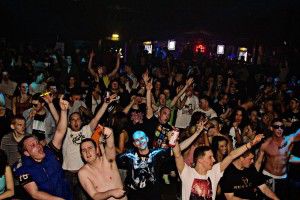 Any club event that can last for 15 years deserves some serious credit especially in today’s financial climate, so firstly massive respect to Andy Vortex and the rest of the North crew for what they’ve done over the years.

Even before this event kicked of you could tell it was going to be something special with over 23 hours of music, across 2 days, at two of the best underground clubs. Boasting over 50 acts with an astonishing 17 foreign acts from the likes of France, Holland, Italy and even as far as Australia you know that they were pulling out all the stops to make this one hell of a party.

As you walked into Motion the first room you came to was the cave. This was nicknamed ‘North –The early years ’ And that’s exactly what it was with sets from legendary North DJ’s such as Producer, Clarkee, Scorpio, Loftgroover , Akira, Dolphin and many more showing you exactly why North is 15 years old and still going strong. As you walked further into the venue you the next room you came to was the tunnel, once again boasting an array of top name DJ’s such as Dutch duo Outside Agency and fellow Dutchman Ophidian just a few of the big names playing in this room. Finally you enter the main room and the production in this room was spot on, big open warehouse with stunning lights and visuals, a massive system plus some of the biggest names within the hardcore techno scene such as Dione, Endymion and Ruffneck (who can usually be found playing to crowds of 20,000 people in their native country of the Netherlands) made for some blinding main room action.

All in all this was a top night, good atmosphere, top music from some brilliant DJ’s. The North crew should be very pleased with themselves. My only criticism about the night (and several others that I spoke to after the event) was the heavy handedness from the security which unfortunately seems to be a growing trend among the larger venues.
Words: Neil Rumble
Photo: Peter White Photography and Promotions

Check out photos from the event HERE