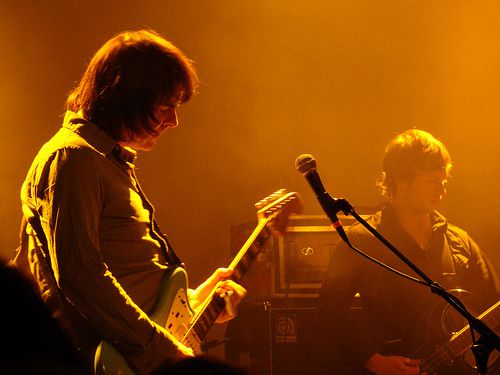 Spiritualized were one of the many influential undercurrent of shoegaze bands from the 90s. They came offered a more blissed out, melodic alternative to the mass sonic drenching walls of noise from the likes of My Bloody Valentine or the cock’n’ballsyness of Primal Scream. They are one of those bands that may well go under the radar of some, but have become a prominent influence of contemporaries, such as the Horrors, The Doves, Beck and Elbow – to name just a few.

The band used to live in Bristol (until frontman Jason Pierce decided to fire the entire band in one of his many drug fuelled hazes) so, it was a bit underwhelming seeing such a sparse crowd in a big place. It also didnt help that there was no support band to help build up the atmosphere. For me, it felt hard to try and generate a sense of excitement inside the main room of the Academy.

Jason Pierce or J Spaceman, depending on which one of his personalities he wants to be, has always been an intriguing personality as he spends the entire show standing sideways on from the audience with his trademark thick shades. I get the sense that he is a very shy person and that maybe he finds it difficult being on-stage, as he spends all of his time staring over at the bass player on the opposite side of a huge gaping space that was filled up with by a huge wall of projections. The projections on the screen gave the gig a a cinematice experience aidding the softly built up melodies.

Everything had a distilled sense of ambience that was built up using various flashing images, helping the songs to crescendo with a gentle fuzz as Pierce’s huge shades projected and alien-styled image against his bleached white skin. Everything about Spiritualized’s oozed a kind off stand offish approach. There was more then a hint of 60s styled lost boy psychedelia. Bright colours permeated the screen as they opened up with ‘Hey Jane’, in which Jason’s vocals sounded cocooned up, with drifting backing vocals that floated along with the swirling walls of guitars which swelled with intensity before folding into a whirlwind.

Playing a combination of new and old material from through out the back-catalogue, especailly prominent were tracks from the new album ‘Sweet Heart, Sweet Light and Songs in A&E’, which focused on Pierce’s near death experiences when he fell very ill due to his battle with drug addiction (this tour so nearly didn’t happen because Jason’s ill health meant that the tour had to be rescheduled twice on doctor’s orders). So there was feeling in the small crowd that they passionately cared that he was alright.

‘Oh Baby’ sounded as if Pierce was asking for forgiveness – as his voice withheld a sense of pain that he left to build up with the growing sense of alienation. ‘Lord Let it Rain On Me’ was sung with a tender sadness. ‘I Am What I Am’ still sounds like a glorious psychedelic romp and it is the older songs in the set that provoke the loudest cheer. It’s the same Sadness that nearly brings a tear to the face Jason’s vocal trawl through ‘Rated X’, delivering the kind of emotion you could feel Pierce crying, even though his face was masked by a huge pair of dark black shades.

But with the band playing with a large gap in the centre of the stage and the swirling projections it kind of had a bit of festival round the fire kind of feel – drawing everyone in. In fact, it presented a kind of religious style of feeling, as though you were in some sort of church. Bringing the set to a close with the cooeing cry of ‘Stay With Me’, that had an essence of lost romanticism, and a cover of David Bowie’s ‘So Long You Pretty Things’.

They returned to the stage bring out the spacerock groove ‘Electricity’, before closing the night with fans’ favourite ‘Cop Shoot Cop’, white washing the place in huge echoed drones that gives the feeling of being on ecstasy, you know like having one huge giant warm hug. This is the only point when Jason Speaks the entire night and it is just to say thanks to the people who have come to the gig, before walking off the stage.