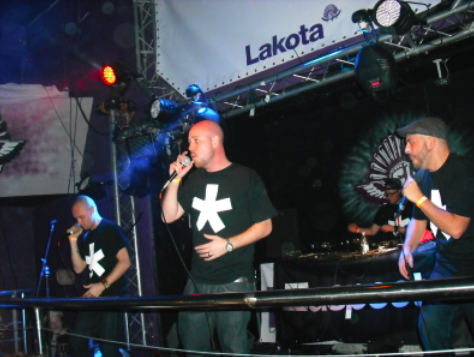 It has been a long time to my knowledge since The Lakota has hosted a Hip Hop event and the audience were expecting good things. For the first time in a long while practically all of Bristol’s Hip Hop crews that could be found at the old Purple Penguin jams at the Thekla were in attendence along with Bristol’s new generation of hip hop fiends which made for a great atmosphere. First up was Delz who did a great show along with his three-piece band which made for a nice change to the typical MC and DJ type stage show.

Next up to the plate were headliners Aspects in the current line up of original MC’s El Eye, Probe Mantis and Bubber Louie with Monkey Moo on turntable and beatbox duties. The opener was the ever popular ‘Top Choice’, opening track from the first album and seemingly a favourite with the crowd. There was an unfortunate yet typical hip hop style lack of microphone volume and lack of effort from the sound engineer but this didn’t stop the ‘Spects delivering a nice blend of new material, notably the DJ Format produced ‘Beat Tape’ and old Bristol Hip Hop classics such as ‘We Get Fowl’. DJ Format with musical cohort The Simonsound surrounded by an abundance of wires and equipment followed with a unique set of DJ Format tracks from all three albums with the odd Simonsound joint thrown in for very good measure with the added bonus visuals showing video’s and animation perfectly synced with the music.

Finishing touches to the evening were Bristol’s Bastard Sunz who also suffered from a lack of sound engineering prowess and for half of the show managed with one microphone but this again didn’t impede too badly on the performance and the crowd had the added bonus of Awkward handling turntables in typical dazzling fashion. The more adventurous members of the crowd that ventured into room 2 between acts were treated to a live MPC and iPad set from Ben One and Awkward in the way they do best.

Nights like this are much missed from Bristol judging by the crowd so hopefully The Lakota could capitalize and get some more running.