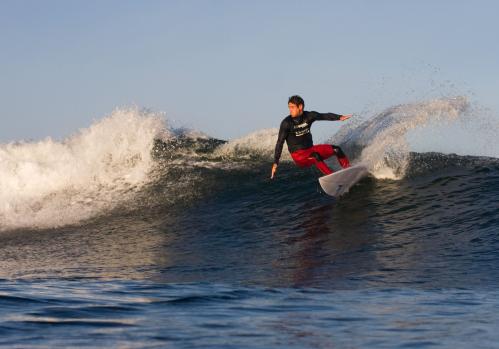 The Extreme Academy, Watergate Bay will again play host to one of Europe’s longest-running surfing competitions in May. The best surfers from across the country will flock to the famous stretch of Cornish sand to compete for the title of English champion over the Spring Bank Holiday weekend of 5-7 May 2012.

Now in its 40th year, the English National Surfing Championships is one of the oldest and largest competitions on the British surfing calendar, attracting competitors in top form after their winter training spent in foreign locations like Indonesia, Hawaii and Australia.

Current English Open division champion Tom Butler has just returned from a winter of big wave surfing in Ireland and is very keen to retain his title. Tom has established himself as an all round talented surfer, both on the competitive circuit and through his big wave surfing. His recent exploits in 50 ft surf at Mullaghmore, Ireland, saw him nominated for the 2012 Billabong XXXL awards which recognise the biggest waves ridden in the past year from around the world.

Tom said: “The level of English surfing is rising every year, with amazing younger guys constantly coming through the ranks. In many ways there is more pressure involved in competition surfing than with tow surfing as you only get that 20 minute window and there’s a certain degree of luck involved about which waves come your way.”

Celebrating the 40th anniversary of competitive surfing in this country, the event will be run by the English Surfing Federation (ESF) and supported by Cornwall College Surf Science and Technology Foundation Degree Students, who will help organise the event.

Surf science lecturer and former English champion Roger Mansfield added: “The Cornwall College students are learning how to become part of the surfing industry, rather than just observers of it. They are building on their social, communication and technical skills on the job.”

Other surfers expected to defend their titles are Anne-Cecille le Tallack (France) for the Ladies, who will face fierce competition from Hannah Harding. Hannah is keen to match her success on the UK Pro Surf Association circuit last year and has just returned from several months surfing in Indonesia.

There will be a handful of juniors stepping up to the Open Division to make their mark in the senior competition as well as the opportunity for the more experienced competition surfers to enter the Seniors (over 28 years), Masters (over 35 years) and Veterans (over 45 years), with likely perennials Jed Stone, Tony Good and Roger Knight contesting for the top slots.

You can find out more Information about the event and how to enter at www.englishsurfing.co.uk or follow them on Facebook or Twitter. For more information on the events taking place at Watergate Bay please visit: www.watergatebay.co.uk/events.htm