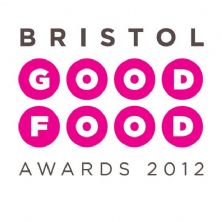 After two months of voting from the Bristol public, the shortlist for restaurants, delis and cafes for the inaugural Bristol Good Food Awards has been announced, May 2012.

Over 8,000 votes were cast with nearly 300 businesses receiving nominations from the Bristol public as they recognised their most loved eateries. The nominations have now been whittled down to 93, making up the shortlist across 24 categories including Best Supporter of Local Produce, Best Alfresco Dining, Best Sunday Lunch and Best Family Friendly Restaurant.

The coveted and highly-regarded accolade of Bristol’s Best Restaurant consists of an impressive shortlist of restaurants spanning cuisines and styles from Michelin Star to Middle Eastern market food.

Angela Mount comments: “It’s fantastic that so many people in Bristol have got involved in the voting process. It really shows the passion that people have for food in the city and the shortlist is a melting pot of different cuisines, styles and budgets. It truly showcases the city’s incredibly varied and exciting dining scene. It’s going to be a difficult task to judge the winners of each category, but our judges are definitely ready for the challenge.”

The results will be revealed at a spectacular Gala Evening on Tuesday 3rd July, 2012 at Bristol City Museum and Art Gallery, where guests will enjoy a three course meal by Milburns and champagne reception and wines by Enotria. The Bristol Food Policy Council will also use the event to promote the Bristol Good Food charter.