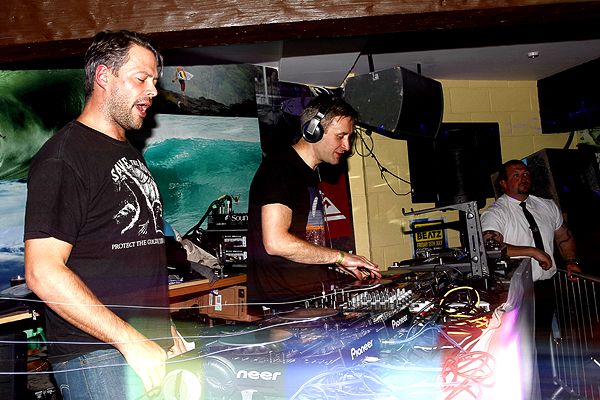 Friday the 13th might be unlucky for some, but not Fistral Beatz attendees! The line-up last Friday was one to remember. Snatch the wax DJ’s, The Freestylers, Plump DJs, Scratch Perverts, A. Skillz, Freerange D’s – what more can you say? It might have been a while since I last went out in Newquay, but this was one night I just couldn’t miss!

A beach venue with the summer we’re (not) having could have been disastrous. Optimist that I am, I was still looking forward to dancing on the sand and watching the sunset over one of Cornwall’s premiere surf beaches; when the obvious happened, the organisers moved the event inside to the Fistral Beach Bar. With the weather raging outside, the move created an intimate atmosphere where the crowd was quite literally rubbing shoulders with the DJs – amazing!

The vibe was friendly and relaxed; it seemed like a largely local crowd were all in the mood to party from the outset. The night kicked off with Cornwall’s very own Snatch the Wax DJs. The first set was a perfect start to the night, whipping the crowd into a frenzy with their fresh take on funky house. These boys really know how to work the crowd. The dance floor filled immediately – ones to watch in the future for sure. Next up were The Freestylers, another nice set. The fashionably late showed up. The place started to fill and started really rocking.

Then, a surprise came – in the form of the Plump DJs. I’ve been around the club scene a while now, but I’ve never seen them live. I didn’t really know what to expect. I’ve heard a lot of their tracks but not seen a DJ set. Let’s just say – they impressed. With Scratch Perverts taking the stage next, this was starting to become a night to remember. I’ve seen these guys so many times over the last 10 years and, as always, they didn’t disappoint. It was a great dubstep set.

If Scratch Perverts were good, A. Skillz blew the crowd apart! This was what we were waiting for. As the set started, I relaxed and took in the scene. The DJ booth was kicking, the whole crowd dancing, hands in the air. For me, this was probably the set of the event (along with Snatch the Wax). A hard set to follow, but Freerange DJs didn’t disappoint. With everyone already in a party mood, it’s possible they had the easiest job of the evening.

If there was any disappointment, it was that I didn’t have a ticket for the Saturday night event. Hey, the Cornish weather didn’t play ball. But quick-thinking promoters made sure the event was still one to remember. The DJ line-up… all together? All in one location? On one rainy night in Cornwall? If it wasn’t for the weather, you could have almost believed you were on a night out in Ibiza!