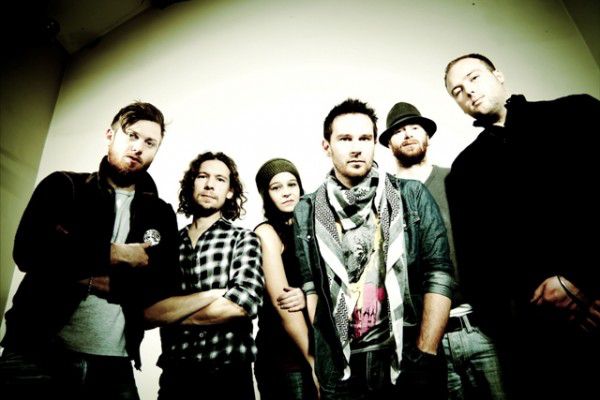 Sum up the post trip-hop Bristol sound for us.

I think that the trip-hop scene is massively responsible for loads of the music still present in Bristol today. Dubstep is huge, and I feel like as a genre it’s a really close relative of the stuff that was happening in the 90s, a bit heavier maybe, but you can see the links. Then you’ve got that festy culture, which is whopping. There is a plethora of Horn led, Reggae, Ska, Hip-Hop and party bands all moving around together on the festival circuit, and I think it’s fair to say that a decent sized handful of them reside in Bristol. I guess that the Roots music culture that’s been a way of life in Bristol for so long is showing no sign of dying out yet. Long may it live!

You’re set for a gig in Bath – where do you stand on the whole Bristol/Bath divide? Is it a fictional divide or do you see a real difference?

We always have a great time when we go to Bath. We’ve played there many times and The Bell is a bit of a favourite of ours. I could be wrong but I don’t see a massive musical divide myself. I see Bath bands playing in Bristol, and vice versa, both towns have loads of people into art and music so it bodes well for us. Maybe you need a few more quid to live in Bath, but that’s ok, it makes it a gorgeous place to visit for us rough Brizzle types!

Our bass player Josh went to school with Joss, so I guess they were like the muso kids around there. They always stayed in touch and obviously Joss went onto achieve massive success globally, whilst poor old Joshy got lumped with us! We kept plugging away, and Joss kept an eye on what we were doing, and when she eventually wriggled free from her major label, and decided to setup her own, she saw an opportunity to sign us up. Stone’d Records’ MO is to help musicians grow creatively and sustainably without throwing major label money around and to try to push emerging high quality music into the mainstream (hopefully that is us!).
Joss has helped us so much since we have come on board with invaluable advice, funding for a music video and amongst other things the recording costs for our debut album ‘Desperations State’ out on October 8. We have just comeback from supporting Joss in Germany and France and played to massive crowds in big venues which is where we want to be so she is helping us achieve our dreams and we couldn’t think of anyone more lovely to be our boss!

So just under half of you have Devon roots, how did Devon treat you as musicians? And what prompted the move to Bristol?

Actually half of us are from Devon. Matty comes from Teignmouth, Josh from Culmstock, and I’m from Honiton, so we’re all within spitting distance of Exeter. However, with the exception of Reuben (drums), we all met at Dartington College of Arts which is where it all began for us. We were given the freedom to put the band together in an environment that oozed creativity. It was such a beautiful setting that really inspired us, and gave us time to figure out what kind of music we wanted to play. Upon completing our studies it became apparent that we all wanted to continue, and being that Bristol had such a vibrant scene already established, and it wasn’t too far away from the green green grass of home, it seemed like the logical city to try. Five years we’ve been here now, and it’s been great for us.

Chai Wallah’s loves you – how do you feel about them?

I think Chai Wallah’s are really important for music in general. They provide up and coming bands with a really professional platform to play on at festivals. The sound is always immaculate, the collective of bands that play there are immensely awesome, the vibe is always lush, and as an artist they make you feel really special. For us when we started playing in there it was an environment where we could realise our potential, and there are not many people in this industry willing to do that for you.

Do you think your music works better in festival settings than at solo gigs? If so, why?

Maybe a few years ago this would have been true but not so much now. We’ve grown up on the festival circuit, and owe it a great deal, but we’ve been giggin pretty much non-stop for two years now so we’ve had to hone our sound and cater for other people and not just festy crowds. We pride ourselves on writing meaningful songs that can grab a listener emotionally, or having big fat catchy horn licks that you can’t shift, so there’s plenty for people to engage with in whatever setting we might find ourselves.

Anything else we need to know?

And a shameless plug for both Bristol & Bath people we are at Komedia, 5 Oct 2012, Triple header with the delectable Gabby Young and Other Animals, and the Hip Hop Brass heavy weights, Lazy Habits. A show not to be missed as we’re all releasing albums around the same time so there’s loads to shout about for all three bands. Also if you’re a student it’s only £5. Tickets available from Bristol Ticket Shop and Komedia Bath.