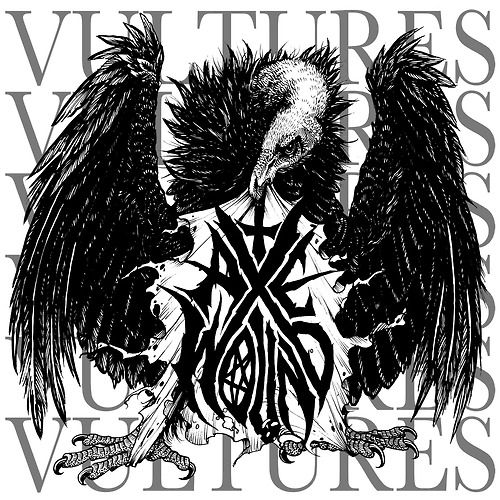 How did the group come together?

It was something I had wanted to do for a long time and I had know Jason from when he stood in at some Bullet shows. We kept in touch ever since as he was the guy I wanted to do it with. We had an opportunity to do it in December last year so I just phoned him up and we kind of just did it there and then. Then after the music was written and recorded then we kind of put the band around it.

Which song do you think most defines the bands sound?

If I had to pick one it would probably be Post Apocalyptic Party. It’s got a little bit of everything that AxeWounds is about. There’s a lot of swagger in that song, it’s brutally heavy but it still something you can nod your head to which is a nice thing to be able to do.

You recorded Vultures in 11 days, with no pre-writing or rehearsing, what was the motivation behind that?

We just didn’t have the luxury of time or budget. We did it all in my downtime from Bullet and we funded everything ourselves, then it was coming up to Christmas so we just gave ourselves a goal of 11 days. We actually dropped one from the album because we weren’t too sure of it so we put it to bed.

How do you balance being in two bands at once?

It’s always a little bit difficult doing what I do, but considering how quickly we did the record, it didn’t really take that much time anyways. We’re not doing extensive touring with it at all. It’s more just whenever we can do something we will, because everyone else in the band has got their own thing going on as well. It’s kind of difficult me trying to juggle getting everyone in the same place at the same so it’s not going to be a full time touring job, it’s just something to do when everybody has some time off. It’s still going to become something because it’s really good and I think it would be a shame not give it the time and effort it kind of deservers now. It won’t take any time out of Bullets schedule or Cancer Bats, we are fully committed to our day jobs but we do want to take this as far as we can.

What do you think are the most significant changes in the metal genre in the past 10 years? Why do you think Bullet has had more success in America than other British metal bands?

I just think more musicianship has come back into the game, I thinks everyone’s noticed that. The new metal thing and the grunge thing that was happening in the 90’s and early 2000’s, it was definitely more kind of swagger and image kind of vibe whereas now it’s gone back to more of an old school vibe with technicality and guitar solos. That’s something that we wanted to introduce from our first EP so I definitely think we are kind of responsible a resurgence in the old school sound, I truly believe that. That’s probably the biggest difference especially with the European and British metals acts, we’ve definitely put an old school flavour back on metal and I think a lot of people appreciate that and the trends since then has kind of been almost the same vibe, there’s been more extreme acts and more commercial acts I think at the end of the day Bullet was a flag flyer bringing old school metal back to the UK and Europe really.

What do you think about illegal downloading of music?

It’s a double edge sword, we as well as every one have taken a massive hit in sales ever since the first album and obviously it’s not something we condone. It is technically anonymous theft, you wouldn’t go into HMV and steal a Bullet record or any record really, you just wouldn’t do it. So the fact that people can do it anonymously online, makes it worse in a way. It’s not something I condone, there’s no way of controlling it unfortunately. It is what it is. If it inspires someone to come to a concert eventually then that’s kind of cool anyways, it works both ways. We’ve just got to get on with what we can do and that’s play live and do great merch and make a living elsewhere as albums just don’t cut it these days.

What’s the future for AxeWound?