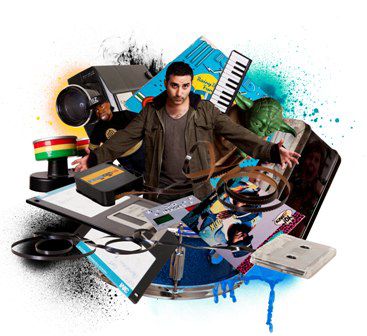 OK, the name suggests you’re a sci-fi fan – is this true?

Actually, no! I got named Yoda by a friend, and never really liked it too much! Until recently, when it’s taken on a new meaning for me. I feel like I’m one of the last DJs using scratching and turntable skills, so it’s a bit like being one of the last Jedis.

Your sampling is pretty impeccable – what other DJs who use samples do you rate?

I just heard Kid Koala’s new album, where he’s scratching up loads of old blues records – I thought that was very cool.

Is there anything you’ve tried to mix and really wanted to make it work but it just wouldn’t go? If so, what was it?

I think I pride myself on being able to make anything work that I want, no matter how obscure or difficult. I think a lot of it is about timing – it’s almost like being a stand-up comedian.

When you started out you were all about the mixtapes, what do they offer that mp3s and playlists can’t?

Mixtapes are a much more personal way to put music together – whether it’s just a compilation on a cassette, or a DJ-mixed tape. I just think a lot more time and effort and creativity goes into it, rather than just dragging mp3s into a playlist.

Do you think it’s too easy to call yourself a DJ these days? And what does DJing mean to you?

The state of most DJing really depresses me in 2012 – I can’t believe some of these people are getting away with it. To me – a DJ needs to have something special, whether it’s skills or personality, that couldn’t be brought to a club by a pre-mixed CD. A lot of people I see DJing now aren’t bringing that to the table.

What do you need for your ideal gig?

An open-minded crowd in the mood for a good time. And some whisky.

You went to Warwick Uni right? That suggests you’re pretty bright – if you went on Mastermind, what would your specialist subject be?

I could go for a few things – maybe a mixture of 90s rap music, the movies of the Coen Brothers and delicious salads.

If you could write a book on anything, what would it be and why?

See the above answer! Or maybe just a tell-all expose of my life in clubs and festivals!