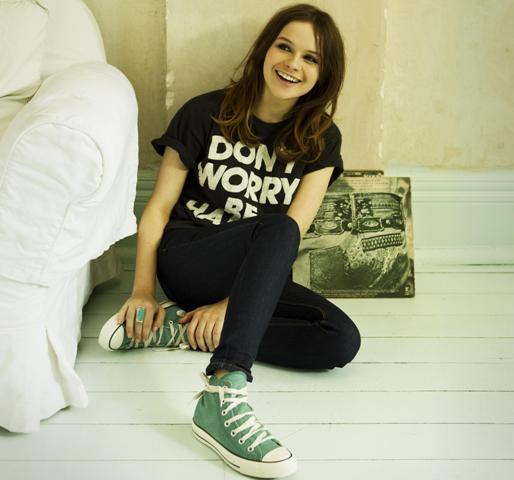 Safe to say, YouTube has been a massive factor in your career to-date. What was the first video you uploaded and tell us what’s happened since then…

The first video recorded was a cover of a Paramore song almost 5 years ago. My friend uploaded it and everything has happened since then. I’ve released 3 EPs, been on a few sold out tours, signed to Parlophone and my first single is out on November the 18th.

How do you decide what songs to cover?

It’s really never a tricky process; If I happen to be singing something a lot, or its stuck in my mind for a while I’m more than likely going to cover it!

You’re self taught right (piano and guitar)? What did that involve?

I find it really hard to pinpoint when and how I learnt the piano and guitar. I just somehow know how to but I dont remember sitting myself down and forcing myself to learn bits! I learnt lots of songs and chords and I guess I just worked it out over time.

You went to school in Chippenham and college in Bath, never swayed by the bright lights of Bristol?

I spend a lot of time in Bristol and have a lot of friends there, more so than Chippenham and Bath! Bristol’s a really lovely city.

How important has BBC Introducing been to you and what advice to you give to other artists trying to breakthrough?

It was a major factor. Although there was YouTube, and other things that contributed to my success so far, BBC Introducing have been on board from the start and has given me a lot of opportunities such as recording a session at Maida Vale, and a radio 1 bbc introducing playlist. I definitely recommend to all artists to make the most of their online and local resources!

You recently toured with Gotye, how was that? And did you tackle his hit song on your own?

I didn’t, but I really enjoyed the tour. It was my first time in a lot of the European countries we visited!

What’s been your best live experience so far? Glastonbury?

Glastonbury is definitely a highlight! Bush Hall in London was definitely a great moment for me, that was by far my favourite headline show. It was the first sold out London show and the first time everyone was singing the words back to me.

What you up to for Halloween?

I’m actually having a little party/gig at the Ring O’Bells in Compton Martin and it’s free. The pub is owned by the president of the label I’m signed to and we’re renaming it the ‘Apple Inn’ for the night.

See Gabrielle Aplin live at the Rong O’Bells in Compton Martin on Halloween for free (October 31), or at Bristol Thekla on November 20, 2012. More info at http://www.myspace.com/gabrielleaplin