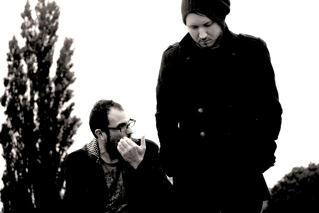 Lots of fab music comin out of Devon these days, why do you think that is?

Has to be the cider. Think maybe there’s always been lots of great bands in Devon it’s just they’ve not had the exposure that others areas get. You’ll find a similar thing with Somerset and the Bristol area. I think also we’re just out of reach, tucked away. Allows bands and musicians to develop music away from the eyes of the big cities.

Tell us about your journey so far…

It’s been interesting. Neil and I have always worked together musically. We started off as Buffseeds, got a record deal, toured the world, did the rock n roll thing. That naturally dismantled and we started up iko. There’s been this strange desire to push on, even when it seemed totally hopeless. We’d seen others like Muse finding national success and always secretly felt that one day someone would get it. Get us. Happily for us that happened to be people finding us via the birth of social media (we have a fan in Greenland) and some very important people in Hollywood. For us, this latest period we’ve said it’s a little like Devon buses. You wait ages for one and then three come at once.

You’ve got a song on the Twilight soundtrack right? How did that come about and how do you feel about that?

We feel as you’d expect. Very excited about it. We had to pitch a song like everyone else. The music supervisors knew about us because they’d used another song ‘look what you’ve done to me’ in the tv show ‘Flash Forward’.
They said they were taking submissions for Breaking Dawn, so I read the book and we wrote the song in Neil’s house. Recorded it within a fortnight and sent it off. Always vaguely hoping for the best. Still can’t quite believe our hopes came true.

And Greys Anatomy! What’s your secret?

We’ve loved tv and movies all our lives. I’ve watched an awful lot of tv and always concentrated on what music movies use. I suppose when you love something it should be a natural byproduct that you can turn your art into something because of that love.
There’s also a trend where by piano and voice music fits well under film, cause it doesn’t distract in the way some other forms do. I guess we’re also a bit lucky.

Well, more than a few nights at Time Piece I can assure you I’ve been dazed and confused. My friends and I have a name for them – ‘the nights we don’t speak of’. But my crazy days are on hold for now. Well, till we get to LA.
I once hit my head really hard on the ceiling of a cellar when I was working as a waiter in a posh hotel. I forgot my name and where I was. That’s the worst I’ve been dazed and confused.

We are finishing our new album now. We intend to tour it, bring it to the world with more tv and film hopefully. And continue to do the thing we love the most for a living. We feel very fortunate to be able to.