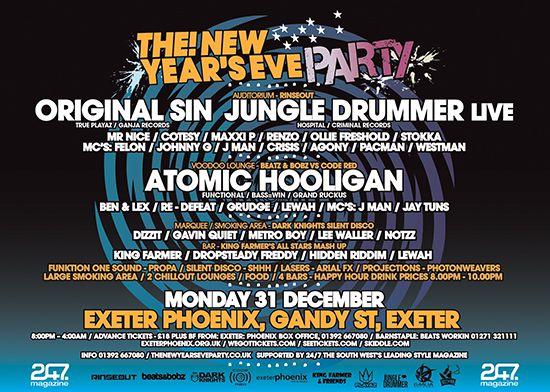 Exeter’s leading electronic music promoters join forces once again for the biggest and best value New Years Eve (NYE) party in the South West. Taking over the Exeter Phoenix, headliners confirm so far include Original Sin from True Playaz and Jungle Drummer playing a live set. Support comes from some of the best SW resident DJ’s over four rooms of music covering D’n’B, hip hop, dubstep, house and electro amongst others and a special outdoor chill out and smoking area with hot food and bar. Get your tickets from www.thenewyearseveparty.co.uk

We are proud to be supporting this event and have a pair of tickets to giveaway.

Fill in the form below and put EXETER PHOENIX NYE in the subject line.
Closing date Fri 21st December 2012.