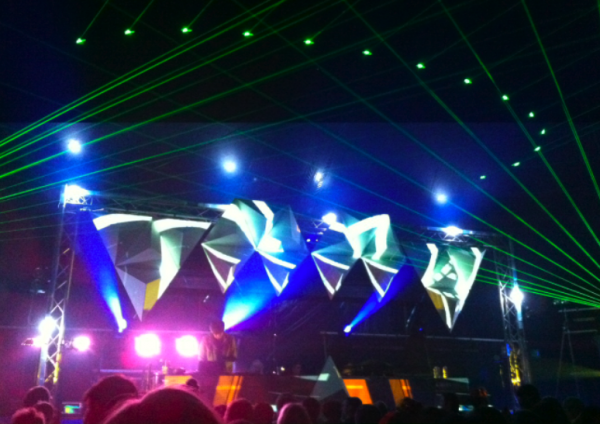 For it’s first year Arc Festival definitely gave an exceptional first impression to the many festivals Bristol has to offer. A 12 hour festival of electronic music and digital art that did not fail to deliver with stunning displays of visual art and projections, excellent sound quality, and a crowd that were most definitely up for it.

When arriving at the festival there was a sense of decent organisation with fast moving queues and no hassle on entry, everyone was cooperating and being friendly, and the sun was really boosting the mood.

There were plenty of different stages to explore, each one with something slightly different to offer. The first one I came across was more of a chilled out vibe with multiple projectors creating very impressive display of moving muticoloured patterns that really knocked you off balance if you were to stare at them for too long, with lighter ambient electronic music to coincide. Close by was the Axis dome where a lot more dancing was taking place at this time, this stage was great fun and boasted multiple PA speakers arranged symmetrically around the dome creating a massive sound that resonated the dome and filled your ears. A highlight of this stage for me was Eliphino, dropping a big house-heavy set that really got everyone going. Next along was the busiest spot, the Arc stage. Headliner Clark (Warp records) played an awe-inspiring set with spectacular syncronised projections that complimented the specialised electronic music perfectly. This stage had the largest capacity and featured incredible sound, and the visual projections across multiple screens behind the back of the stage really made it special. This was accompanied by the use of very creative lighting design and impressive lasers. Normally there are only a couple of good spots in a venue where it sounds great, but the sound clarity was fantastic and Arc had clearly not settled for second best.
It was at nighttime when the profound projections and lighting effects across the festival really took effect, alongside the mapped projections and swirling lasers, there was one bit of décor that really stood out in a tree not far from the Polygon stage: Two massive luminous eyeballs staring right at you that were waving about in the slight breeze, just for trippy effect.

A personal highlight for me was Appleblim’s set in the Tangent Dome, where the decks were centralised alongside the lighting designer in the centre of the dome with the crowd surrounding the decks. This allowed for a much more intimate set where you could see how just much effort goes into the production of a live set, and allowed you really immerse yourself into the music, a really special audio visual experience.

There were no teething problems that I came across at Arc festival, the bars were well staffed, the food stands were local, and from the amount of effort the organisers had clearly put into the festival, it really deserved to sell out. Perhaps timing was an issue, for many students the festival was placed in a time of exams, yet with so many festivals popping up everywhere, Arc may have had no choice. Even if the numbers were not maxed out, it still had an obvious sense of community in electronic music with an appreciation for modern production, digital art, with a friendly crowd who were not half-hearted about any part of it. For serious fans of electronic music, it’s highly recommended.