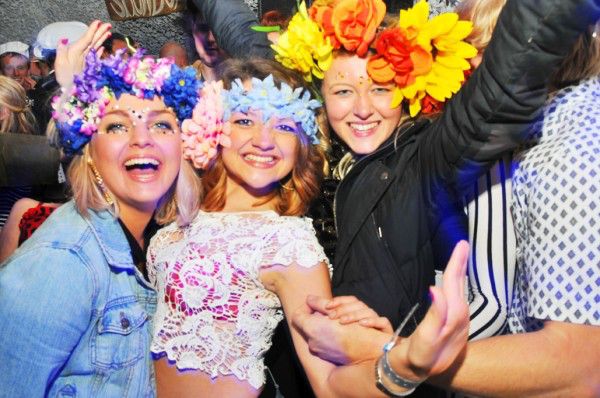 The first bank holiday in May is rapidly becoming synonymous with being in one place and one place only and that is just where 247 decided to be with 3,000 other people for this years utterly amazing Masked Ball in Porthleven, Cornwall. Expanded into two days and with twice the capacity, Saturday night saw the event sell out in the face of slightly uncertain weather before bursting into full on Kernow sunshine effect all the way into far too early Monday morning.

With probably one of the most beautiful, up for it and dressed to the nines crowd you can possibly imagine the annual Masked Ball thoroughly deserves its place in the hearts of all those who go. It’s one of those west country events lovingly produced by an incredibly hard working crew of local superstars who toil tirelessly to give their punters the best time ever in an amazingly beautiful cliff top location looking right out to sea. Consequently it deserves all the support you can possibly give it.

The Upper Terrace won our hearts this year with amazing hands in the air sets from the Cuban Bothers, The Other Tribe and Yoda. Rave circus crew Incandesence took a leaf of out the Rabbit Holes book with their new venue Wunderland with entry via a secret tunnel headlined by none other than Adamski who was simply off the hook. Disco In Kernow won the title for possibly the best disco in Cornwall, complete with a Bowie inspired set part way through the night! Overlooking the Atlantic ocean, Jack Beats and the Freerange boys broke it down properly on the Lowdown Terrace against a rocket fuelled firework backdrop high in the Saturday night sky.

Special mention must also be given to new venue for this year Area 54 aka the UFO which crash landed in a blinding burst of techno from another planet mayhem first from John Harris before a set of truly whomping mahousifness from Simmer took us into the early light of Super Sunday dawn.

What was an unofficial chill for the Sunday after party in a field has now become an official part of the Masked Ball’s very welcome future. Sundays at festivals are definitely our favourites, especially when the suns out and absolutely everyone is having the kind of rumpled day after the night before fun that the day is just made for.

As the sun went down in all its awesome Kernow glory it seemed like just about everyone who had made it through headed up to catch local musos “Live” cover the entire length of Daft Punks album. What a great idea. With a few added twists the music was the perfect end to a properly wicked weekend. Long may the Masked Ball reign, we’ll be seeing you on the dark side for Halloween to do it all over again…