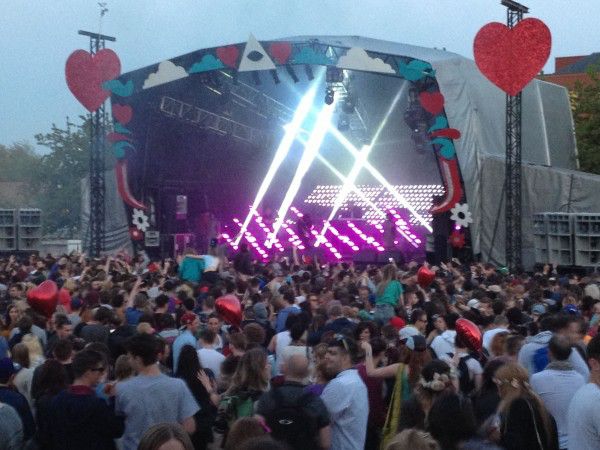 Building on the success of its debut in 2012, this weekend saw the eagerly anticipated second coming of Love Saves the Day. A 10,000 strong, sold out crowd, were treated to two days of non-stop music, uniting some of the world’s top international acts with the best of Bristol’s much loved music scene.

Arriving at the sun soaked Castle Park, in the heart of city, this year’s event felt a long way from last year’s rain drenched attempt. An excess of bunting, glitter, face paint and other love themed paraphernalia met crowds as they entered the site and helped to establish a fantastical atmosphere full of intrigue and excitement. Enough familiar Bristol caterers, exhibitors and characters ensured this year’s event definitely felt like a celebration of all that is iconic about the city.

The day kicked off with a trip over to the Digital Soundboy Stage to witness, the closing half of D&B old boy Shy FX rinse out the classics to a more than receptive audience. Then on to the Just Jack Stage to watch the triumphant return to LSTD of crowd favourite, Joy Orbison. Oscillating with ease between house and techno, Orbison gave the crowd plenty of reasons to get their feet moving with over an hour of some of the biggest tracks of the moment.
Moving about the main stage area, it became apparent the increased scale of this year’s event as the grassy banks of Castle Park became cluttered with an abundance of sun-soaked partiers ready for the main acts of the day. The eagerly anticipated Bonobo treated a hugely enthusiastic crowd to a typically eclectic set of predominantly chilled out housey numbers with a vibe that perfectly complimented the weather and the mood of the day. Next was London’s electro pop duo Alunageorge, which saw Aluna Francis’ chic summer style and intriguing vocals combined with George Reid’s fresh beats. An enticing rendition of ‘Attracting Flies’ with its infectious whistle beat chorus, brought the crowd together in such a fashion that suggested it was no doubt going to be one of the anthems of this year’s summer festival scene.
The evening was brought in on the Just Jack Stage with tech house heavy weight Seth Troxler, who delivered an upbeat set combined with an impressive light show which captivated ears and eyes alike.

The day finished at the star covered main stage with an eagerly anticipated set from the break out act of 2012, and Rudimental did not fail to impress with a seamless mix of relentless yet irresistible beats that verified summer was well and truly here. They performed a loaded set full of material from their debut album; pounding bass, melodic trumpet, insane drums and soulful harmonies, which resonated full force across the park. The crowd responded in kind. The giant choruses of ‘Not Giving In’ and ‘Waiting all Night’ saw hands raised, feet shuffling and growing excitement for the unavoidable bedlam of the climactic evening. The inescapable hit of last summer, ‘Feel the Love’ was met with a euphoric reception, prompting a mass sing-along that echoed throughout the night.

The only question being asked is not as to whether this festival will return next year, but whether it will be nearly as noteworthy.