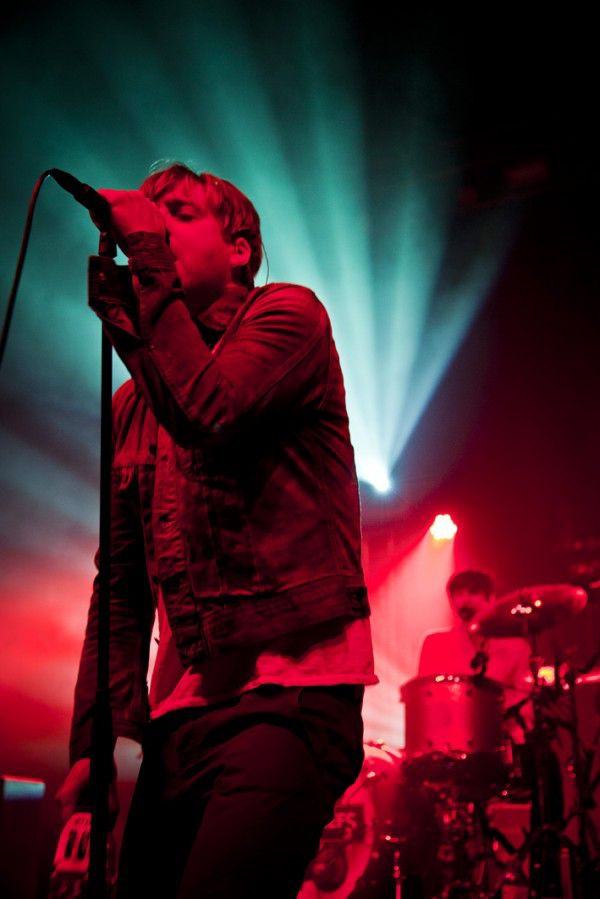 “It’s very peaceful here,” remarks Julie Edwards, drummer and one half of Californian rock duo Deap Vally, a couple of songs into their set. “So it’s nice to be able to bring a racket.” But the pair aren’t planning a few rounds of lawn tennis, of course. With just a couple more days to go before the UK release of debut album Sistrionix, Deap Vally hit the Eden Project for this gloriously sunny evening’s session with headliners Kaiser Chiefs. Shoeless, bassless and unapologetically loud, the two-piece quickly set about shattering the silence of this usually tranquil Cornish setting with a selection of tracks from their imminent release. And who needs a bass when you’re already boasting a noise like this? Deap Vally’s minimalist setup might make those White Stripes/Black Keys comparisons difficult to ignore at times, but thankfully the Vally girls’ music is anything but minimal. Despite her relatively small kit, Edwards’s thunderous drumming threatens to shake Eden back to its former days as a quarry, while frontwoman Lindsey Troy provides enough riffs and wails to keep most Led Zep fans happy. Scruffy, lively and occasionally hectic, Deap Vally’s onstage persona and appearance matches up perfectly with the raw, party-hard attitude of their music. It’s exactly the kind of thing you’d expect from a band with songs called Baby I Call Hell and Bad For My Body. “It was nice to visit California,” says Edwards, in reference to part of Eden’s Mediterranean Biome. “We haven’t been home in a while.” It was good of the weather to turn up too.

It’s been almost two years exactly since Kaiser Chiefs brought out their fourth and most recent album – 2011’s pick-and-mix release The Future Is Medieval – and it’s probably fair to say that, Olympics closing ceremony appearances aside, we’ve heard very little from them since. But despite having no new albums to support and no new singles to show off – yet – the band make their welcome return to the Eden Sessions. And the feeling is entirely mutual. “We are the Kaiser Chiefs from Leeds… and Cornwall!” announces frontman Ricky Wilson, professing his love for the region and revealing himself as a new resident. As the five band members take to the stage, just as the sun is setting on this long, hot day of music, Eden’s outdoor theatre is packed with people ready to hear some of the band’s numerous hits from the last nine years. Fortunately for them, the band certainly aren’t here to disappoint. Kicking off with Thank You Very Much from 2007’s Yours Truly, Angry Mob, the Kaisers start as they mean to go on with the song’s punchy opening riff and their equally dynamic lead singer. Wilson is on typically chaotic form tonight, launching his mike stand into the air, bounding onto the monitors and generally having little regard for his own safety. He fails to mellow even after one particularly dramatic tumble, which earns him a shocked gasp from the crowd followed by a cheer as he returns to his feet unfazed and unscathed. “It’s not very sensible,” he sings appropriately during I Predict A Riot, soon after clambering to the top of the lighting rig. As you’d expect from a Kaiser Chiefs show, there’s no shortage of sing-alongs with tracks like Everyday I Love You Less And Less and former Number One hit Ruby to be enjoyed, and the audience are only too happy to comply. For the final sing-along of the evening during Oh My God, Wilson charges to the back of the crowd and scales a viewing platform to conduct his 6000-strong backing choir. As the show comes to an end, the vocalist returns to the stage to enjoy the last few minutes of cheering with the rest of the band. “I’m a junkie for that shit,” he says.