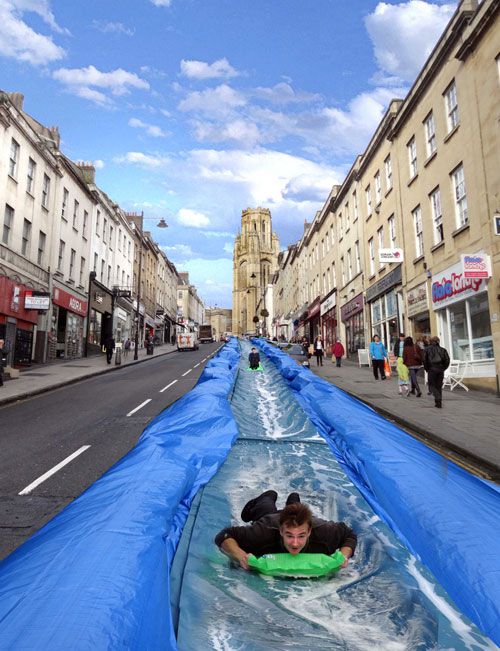 A proposal by Bristol artist Luke Jerram aims to transform Park Street by setting up a 90-metre water slide for people to slide down. The Park and Slide project – which is currently raising money through spacehive.com – will consist of a temporary slide made from plastic sheeting and hay bales, and will be free for the public to use. Compared to the pricetag attached to many urban infrastructure schemes the cost is low; just £5,621 – and he only has £800 left to raise to make his idea a reality. You might remember Jerram, who has a history of working on interactive public art projects, when he installed numerous Street Pianos across the city back in 2009 and that project spread across 43 cities across the world. His latest idea was thought of during last summers heatwave.

Speaking to the Guardian, Jerram said “If we think about forms of transport, the best kinds are pleasurable as well as practical, Bristol’s very hilly – imagine if we had permanent slides about the city, running from Clifton to Hotwells or Cotham to Stokes Croft?”

“I’ve got an office on Park Street and I was just looking out the window and thought, how nice would it be to have a slide out there…” he says. “It’s all about looking at the city in a new way. I’m interested in thinking of Bristol as a canvas for architectural intervention. This is our city and it’s up to us to think about how we want it to be in the future.”

The idea, which has the backing of Bristol City Council, had a test run last year in Ashton Court, when a 50m chute was set up. If the plan goes ahead the slide will be installed on May 4 as part of Bristol’s Make Sundays Special and Bristol Art Weekender.

Donate at spacehive.com to make this unusual idea happen!

UPDATE: Registration for the ballot to get a ticket to ride the slide is now open – you have until 20th April to register here