DAVID BOWIE RELEASES SUE (OR IN A SEASON OF CRIME) VIDEO 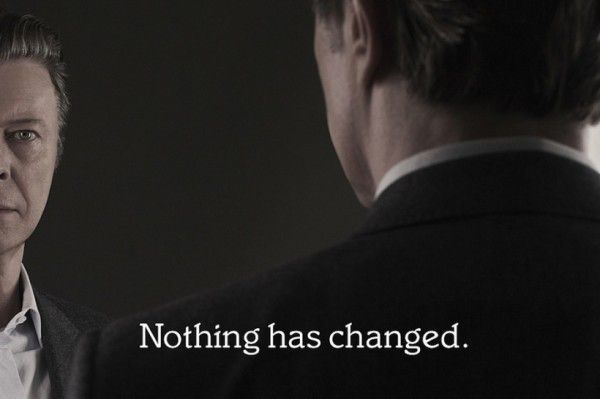 Here is an exclusive first look at the new SUE (OR IN A SEASON OF CRIME) single from David Bowie taken from the forthcoming definitive collection of Bowie’s music NOTHING HAS CHANGED; both are released on Parlophone on November 17th.

The video for SUE was filmed in New York and London and directed by Tom Hingston and Jimmy King. The track was recorded earlier this year with the Maria Schneider Orchestra and produced by Bowie and Tony Visconti.

Earlier this week Bowie revealed the demo track ‘TIS A PITY SHE WAS A WHORE which is also featured on the limited edition 10’ single and digital bundle of SUE (OR IN A SEASON OF CRIME).

David Bowie – Sue (Or In A Season Of Crime) on MUZU.TV

NOTHING HAS CHANGED collects together for the first time the definitive collection of Bowie’s music from 1964 to 2014 and features some previously unreleased material as well as tracks making their debut on CD.

David Bowie is, a film of the blockbuster exhibition created by the Victoria and Albert Museum, will be released in cinemas across the UK and Ireland on November 18th. Distributed by Omniverse Vision, the documentary was filmed on the closing night of the V&A exhibition in London and directed by Hamish Hamilton, the BAFTA-winning Director of the Academy Awards and the Opening Ceremony of the London 2012 Olympic Games. For the trailer, participating cinemas (including Bristol, Falmouth and Plymouth) and tickets, visit www.davidbowie.com/davidbowieisfilm