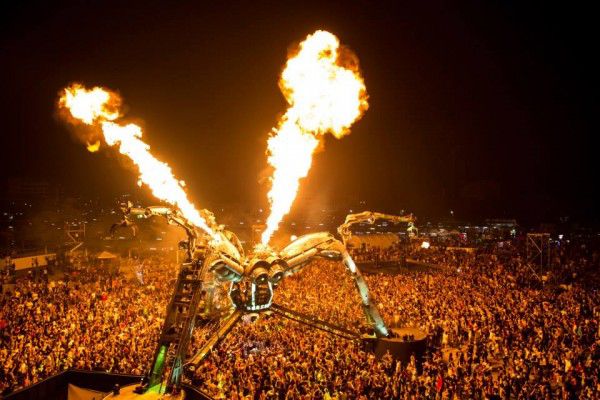 Spectacular production experts and festival arena hosts at Glastonbury and Boomtown, Arcadia have announced they are hosting an exclusive Bristol based festival in the summer 2015.

Famous for their mechanical inventions and use of fire in their stage performances, their giant mechanical spider is the centre piece of the after dark experience at Glastonbury and was most recently seen at the Gravity Festival in Thailand.

Posting on Facebook, they said: “We’ll be kicking things off back home at the mighty Glastonbury – whipping together new performance and technological elements to ramp up the spectacle.

We will also be launching a whole new Arcadia event in Bristol next season – something we are incredibly excited about. It will be our only UK event apart from Glastonbury, and Arcadia’s entire creative, performance, technological, and mechanical arsenal will be unleashed at full throttle.

Arcadia won’t be at BoomTown in 2015. It’s been an epic three years and both of our collectives are keen to evolve and continue pushing creative boundaries”.

We’ll bring you more details as soon as they are announced.