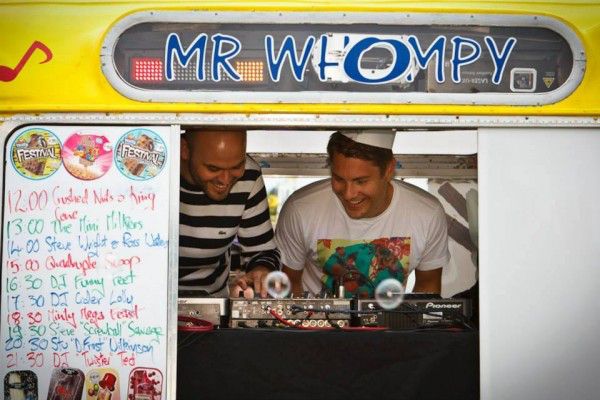 Mr Whompy is a classic 1970’s Ice Cream Van with a difference. This unique project which began with a crazy idea to transform a standard Bedford van into the craziest disco on the planet. With nostalgia being the order of the day, and with the imagination of Stuart Wilkinson combined with the energy of Tim Sobey and Neil Ratcliffe, they had the inspiration and technical genius to make something special. Mr Whompy was born late summer 2013 with its debut at Brisfest, many said it was the star of the show, not just was it unique, entertaining and a great visual show, but the soundsystem is incredible. Why stop at an average soundsystem when you can have a Void / Funktion One system that can melt any ice lolly. The sound system is hot and has been one of the main qualities in its sound and appearance, alongside a arsenal of lighting, lasers, smoke, bubbles and visuals all within the van itself.

Mr Whompy does not stop there, the Whompettes dancing girls are an essential extra – a bit like the flake on the top of a 99 cone. With Djs including Conroys Cornetto Cabaret, DJ Whippy and MC’S ‘flakey & Fab’ Ice cream spectacular and Farte D’Or, all playing a variety of disco, house music and electronica to suit each event, including Brisfest Boomtown and In:Motion on New Years Eve / Shapes on New Years Day.

We have an exclusive mix from Mr Whompy, listen to it below.