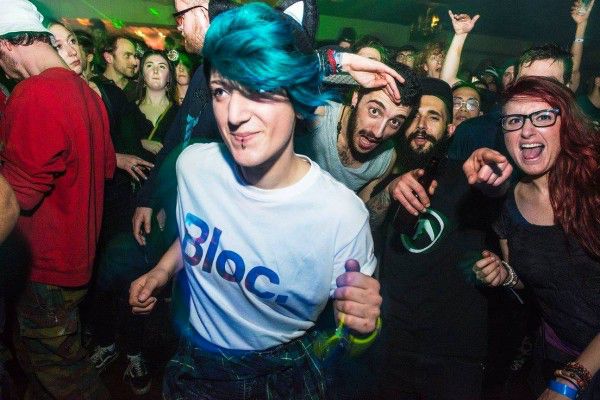 Returning to Minehead, Somerset after a long anticipated break, Bloc. landed at its seaside retreat of Butlins once again to the joy of the faithful that have supported the Festival since its beginnings. Bloc. has always held a special place for those seeking something that holds true to the underground, daring to push boundaries that other festivals wouldn’t even consider.

As the masses started to arrive on Friday, the inevitable backing up of cars gaining entry started, largely down to alcohol purchased off site being confiscated. Full car searches kept many waiting although with everyone warned in advance, tales of over zealous security were bound to emerge after contraband had been confiscated. Reports of security being tight over the weekend were bouncing around site but clearly Bloc. wanted to ensure its future at Butlins, and after the previous turmoil of their ill fated London event in 2012, it felt they were taking no chances. Personally I had no troubles, as tight and sometimes bureaucratic as security was, the festival did feel safe and in control. Perhaps next year Bloc. will ease up on what many thought was a bit heavy handed treatment from the security, now they have settled back in their old home.

The festival ran over six stages, connected by an atrium with all the arcade action you could throw pound coins at. Main stage Friday headliner Jackmaster pulled out at the last minute to be replaced by Robert Hood who switched from the Red Bloc stage, bringing the main stage to a close in true Underground Resistance style. However being pinned to the wall by Objekt and then aurally assaulted by Karenn, for me Fridays highlight was in Red Bloc stage. Cascading acid and thundering bass rolling across the dense smoky strobing room turned Butlins into warehouse rave with all the passion of a crowd that felt like they had found a long lost friend.

Saturday took off on the high where Friday ended, with all stages showcasing the experimentalism and first class taste in music the Bloc crew have become known for, with new talent giving headliners a run for their money on every stage. Special mention has to go out to the stage hosted by the Plex crew for serving up some of the most underground sounds I’ve heard in a long time. A crew that really know their Techno, it was a pleasure to be part of their dancefloor. Centre stage was inevitably packed with Detroit legend Jeff Mills tearing the place to bits with his live 909 show, with Autechre and Jon Hopkins creating that diverse Bloc. sound we have come to know and love before him. Red Bloc similarly featured a crowd-pleasing show from Carl Craig, followed by Ben Sims and DVS1 b2b on 6 decks… No time to break, just rolling relentless for three hours with two of the worlds most hands-on and dynamic techno DJ’s. Saturday’s show really cemented how smart the Bloc crew are when it comes to pulling their music selection together!

Wearily Sunday arrived with a warm up in the pub with various reggae sets, headlined by The Specials Jerry Dammers before DJ Bone ended proceedings with his signature mixing and tune selection replacing the traditional pub quiz action. From the off, the I Love Acid room was spewing 303 from it to a packed crowd that lapped up every squelching bassline. This wasn’t about nostalgia, it was about love of the acid sound old and new. Sunday nights Centre stage featured the Ostgut Ton takeover and in true Berghain fashion, Ben Klock and Marcel Dettmann played b2b to a heaving crowd confirming their talent to bring the house down. With confetti cannons heralding the end to an amazing weekend, smiles, claps and cheers from everyone filled the room confirming Bloc. was back on form.

Bloc. delivered a show that put itself back on top for those seeking a festival that really knows how to deliver an underground and experimental experience. Forget the past, focus on the future, because Bloc. really is a world-class outfit and to have such and event in the South West is an honour. Welcome home Bloc!

BLOC RETURNS TO MINEHEAD FOR 2015