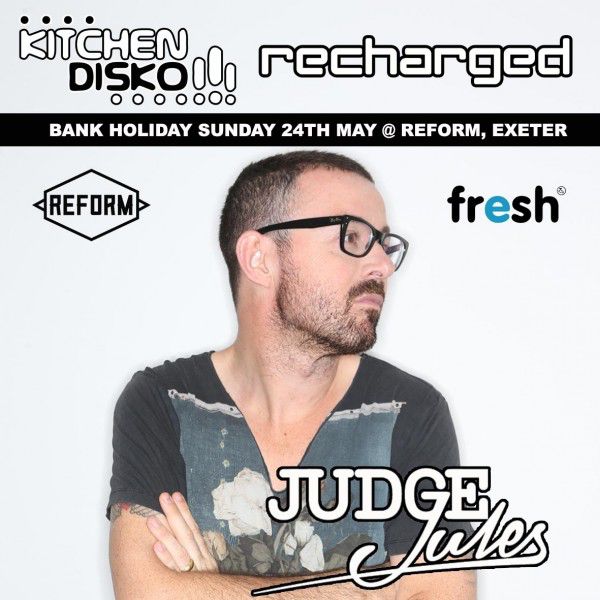 With the recent and unfortunate cancellation of Plymouth Volksfest 2015 scheduled to take place at Newnham Park on the last May
Bank Holiday, festival goers have found themselves high & dry along with many artists / acts that had reserved this weekend for one thing only.  Aztec dance area organisers Nick Coles & Dave Moore decided that the show could still go on (albeit in a more intimate venue and
slightly different location), and swiftly got stuck into finding a replacement venue to host some of the key dance related acts
that were scheduled across the weekend.

As a result the ‘Exeter Bank Holiday Festival Filler’ is now taking place at Reform nightclub on Fore St (thanks to local venue
manager Robin Patterson), and promises for what could be up to a 12 hour session of electronic music in the heart of the City
(extended licence pending).

Headlining the event will be Radio 1 legend Judge Jules, appearing just shy of his obligatory Ibiza season with his weekly
series of Judgement events. Also on the bill is DJ Wire who is often found supporting Example on his global club dates
after the meteoric rise of their Ministry of Sound album together ‘The Playlist’. London future bass pioneers Punx Soundcheck
will also be complimenting the proceedings with their eclectic presence alongside around 25+ DJ’s across two floors of Funktion One Sound!

“With a bit of swift negotiation and support from local venue manager Robin Patterson I was able to arrange for two of the
key Aztec stage headliners to agree to this intimate show” said Nick Coles earlier this week.  “This is a real coup for Exeter, to have numerous global dance acts of this calibre all under the roof of just a 300 capacity
venue isn’t something that is likely to be repeated anytime soon”.

Judge Jules will be appearing from 7.30pm to 9pm at the Kitchen Disko & Recharged all day club event which kicks off at 4pm.

“I’m gutted to have heard about the cancellation of Volksfest, a festival I was very much looking forward to playing – but as they say, the show must go on and I can’t wait to keep the party going in Exeter at such an intimate venue” said Judge Jules earlier this week.

Tickets are £8 on the door before 9pm and £10 after and are on a first come first served basis.

The 200-act Volkfest was due to take place in Plymouth over the Bank Holiday weekend, but was cancelled earlier this week after event co-ordinator Vince Davies was taken ill.