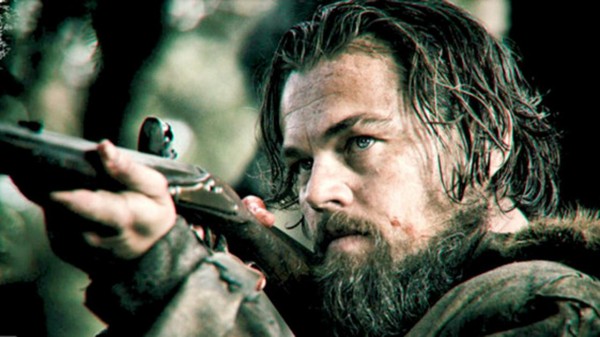 Based on a true story, The Revenant is a fiercely-drawn tale of survival, not for the faint of heart.
Set in 1820’s America, Leonardo Di Caprio plays fur trapper Hugh Glass, who after being mauled by a bear, leaves his hunting team with a horrifying dilemma. John Fitzgerald (played by Tom Hardy) and Jim Bridger (a wonderful Will Poulter) are the team members who elect to stay behind and take their injured friend to safety.
While Bridger’s loyalty holds, Fitzgerald spots an opportunity. Knowing he’ll pocket the danger money whether Glass lives or dies, Fitzgerald buries a still-breathing Glass in the dirt. Taking Bridger with him, Fitzgerald leaves Glass to perish.

Glass claws his way out of the makeshift grave, and begins a quest for revenge. Swinging perilously between life and death, his journey seems impossible, but the thirst for survival spurs him on. The Revenant is a film of few words, but you don’t miss it because the narrative is pure adrenaline. This is open country without maps or rules – and that’s what lends the film its barbarous edge.
Showing us nature in all its beauty and cruelty, cinematographer Emmanuel Lubezki does for snow what Nicolas Roeg did for the blistering sunshine in ‘Walkabout’. Getting a sense of place in this film is crucially important, and Lubezki excels. He captures the daunting scale of the American wilderness, and it makes for an extraordinarily vivid experience.

The final scenes take us to the heart of the Revenant. Director Alejandro Gonzalez Irranitu’s choice to end with Di Caprio looking straight at us completes the circle. After so much anguish and bloodshed, the final, exhausted moments are human to human. It’s a small touch, but it finishes the film in a gloriously unexpected way. Never taking the easy route, Irranitu elevates the film over and over again, pushing each scene to its dramatic limit.

The Revenant marks a milestone in Di Caprio’s career. The boy has gone; the effortless charm of Gatsby and the sweetness of Romeo evaporate as you get further into this film. Di Caprio finds the vulnerability in Glass and brings out an emotional depth and balance. By all accounts this was a tough film to shoot, but Leo is clearly not afraid of a challenge. He gives Irranitu (and us) absolutely everything he’s got. With less dialogue to work with, Di Caprio digs into the physicality of the role, etching his face with pain. It’s a superlative performance, dovetailing perfectly with Tom Hardy’s thoroughly amoral villain. Di Caprio’s always missed out on the big awards, and frankly if The Revenant doesn’t do it for him, nothing will.

A film beset with budget and production problems shouldn’t be this good – but it is. The history of cinema is littered with failed projects – but the ambition here is harnessed to great effect. Against the odds, The Revenant rises to become not just a serious awards contender, but a starkly beautiful and wildly evocative film.