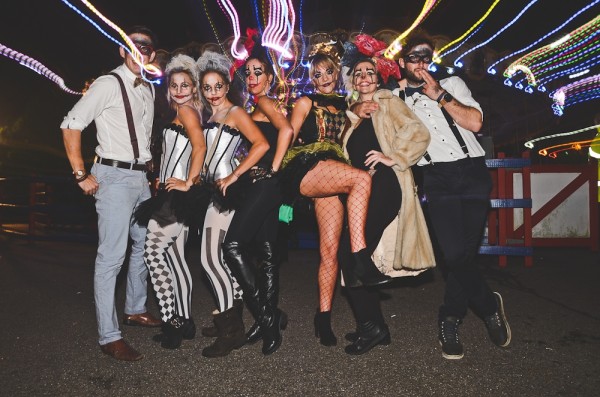 For one night, Helston, Cornwall, became the freak epicentre of Europe when more than 6,000 revellers excelled in their attire, and stamina, to indulge at one of the largest ever Halloween Masked Balls. The theme of this year’s Halloween Masked Ball, an event touted as Europe’s largest Halloween party and a firm date in any hedonist’s diary, was Coney Island: Freaks, Geeks and Human Marvels with the assembled thong taking their cue accordingly with an array of fantastically original and bizarre outfits.

Ballers were entranced by a maze of more than a dozen curated and themed venues, each with its own immersive décor and atmosphere. Acts such as Danny Bryd, |Camo & Krooked, LTJ Bukem, Hot Chip and DJ Yoda joined an illustrious line-up of more than 40 national and local acts backed by theatre troupes, stunt performers as well as a live a wall of death to produce a party best described as an illuminating trip into the unknown and back.

Masked Ball director Kelvin Batt said: “The team and myself are delighted with how the Halloween Masked Ball went. We are super proud to be able to pull this off in Cornwall, especially in our hometown of Helston. Everyone involved did a fantastic job and all the ballers had a great time.”

Now in it’s tenth year, The Masked Ball has grown from a small gathering of just 250 people to a biannual affair that prides itself on pouring tens of thousands of pounds into the local economy, nurturing local artistic talent and promoting put west Cornwall.

Kelvin added: “All eyes are now on the Summer Masked Ball on May 26-28, which kicks off the summer festival season. All I can say is we have some real surprises, expect the unexpected.”