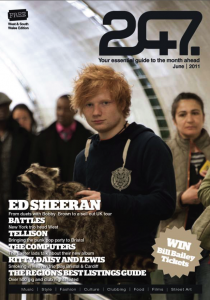 This month’s West and Wales cover star is the hotly tipped Ed Sheeran. Sheeran’s first headline UK tour was a sell out success so he’s announced more dates for the Autumn as well as a heap of Westcountry festivals. We’ve almost doubled our features count this month and bring you interviews from Battles, Tellison, Kitty Daisy and Lewis and The Computers – all of whom are playing in the region as part of the pre festival gig drive. Out food page looks at ethical eating and previews the Cheltenham Food Festival, the film page has an interview with the Bristol-based director of Eliminate: Archie Cookson and our Snapped page features some pix from last month’s ATP at Butlins in Minehead. This along with all of our regular listings makes for a darn good read we think!