EXIST TO RESIST – A HISTORY OF DIY RAVE, FESTIVAL AND PROTEST CULTURE 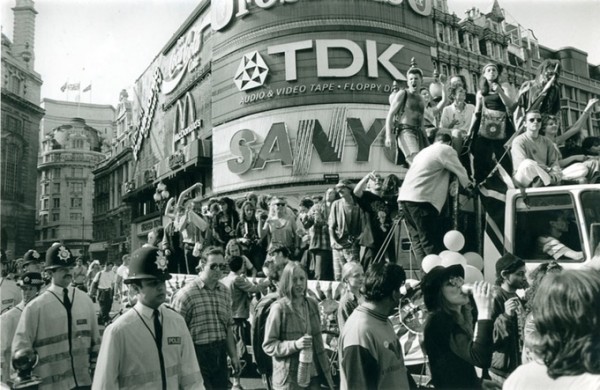 Regular 247 contributor, Matt Smith has launched Exist to Resist – a social history book of born out of a love for UK’s rave, sound system, and festival culture from images made between 1989 and 1997. In the early 1990s, the UK Government finally decided to legislate against the popularity of raves, protest, free parties and festivals after over a decade of targeting that social phenomenon for persecution – and Matt was there documenting key moments over that period.

In the 90’s, after over a decade and a half of Conservative government a great culture of resistance and opposition had arisen and become embedded within British society. Acid house and rave served as the musical soundtrack that united all of those disparate sub-cultural tribes in one mission; to gather, dance and celebrate together for free. Moving forward to 2017, it is now 23 years since Government acted to prohibit and enclose that cultural freedom in law and it is time to tell that story from the inside. As the 1994 legislation approached, an ordinary group of friends drawn from the West Country collectively decided that it was their social and political responsibility to oppose that legislation in any way possible, in order to stand up for and perpetuate a culture that they had known and loved. As they followed this path, they inexorably intersected with history.  The book, Exist to Resist is a document of that process and of the community which Matt became part of. It is a before, during and after testament to the years that created our modern festival industry.

All the images in Exist To Resist are shot on film using a Nikkormat 35mm totally manual camera and a Rolleiflex twin lens reflex. Images are rare from this culture at this point in time. People with cameras were generally regarded with suspicion because of undercover infiltration by authority and the outsider nature of what was a uniquely democratic social phenomenon.