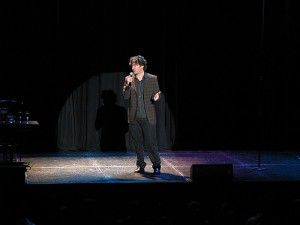 While I don’t want to advocate people overindulging when it comes to booze and mind-altering substances, it has to be said that some of the best music, art and comedy is created by drunks and junkies. Take Dylan Moran. His lovable drunk act has summoned a million laughs over the last decade. His depiction of a jaded old indie book store owner in the UK sitcom Black Books (alongside Westcountry favourite Bill Bailey) had me in stitches. And last time I saw Moran do stand-up back in 2006 it was hard to distinguish him from his alter-ego Bernard Black. Five years and two kids later he seems a lot less cynical and much more content with life. And let’s face it, if all is dandy you don’t got much to base your observational comedy on hey?

I’d heard reports from Cardiff (where he’d played the previous night) that he lost his train of thought and had to leave the stage to compose himself before carrying on for a disappointingly short time. Needless to say, I was pretty dubious about this gig. And this show started off pretty slow. Moran’s pregnant pauses may have been intentional but bearing in mind the reports from Cardiff I put it down to him being out of practice. For the first 10 minutes or so there wasn’t one genuine belly laugh only a few groans and grins hidden among the awkward silences. Then he seemed to find his flow (interestingly it coincided with him taking a swig of red wine). Just sayin.

His repertoire centred a lot on observational comedy about women, Bristolians and the Irish. Each tangent he veered off on comprised a meander through his frantic childlike (yet at the same time grumpy old man) mind. And his two best gags involved seafood. One was referring to the way some women stumble around in stilettos, claiming to ‘wear them for them’ when that can’t be true unless they intended to look like ‘a shrimp being airlifted’. The other was about how, now he’s married with kids, he’s expected to go to dinner parties. He mocked the entrees on arrival, dubbing them ‘what’s this? a prawn pole dancing on a breadstick? where’s the proper food?!’ Laugh aloud funny.

Moran was also battling a chesty cough, unsurprising considering his reputation for smoking like a chimney. He lost his voice a couple of points in the show but managed to turn it into a joke when someone in the audience mirrored his cough, snapping ‘you call that a cough? that’s not a cough,’ before launching into another joke. There were also heart-warming moments where he paused to clear his throat or take another sip of wine when the audience laughed, not out of politeness but out of genuine amusement and Moran chuckled at himself. It was these moments which made you think perhaps the whole stand up show was as much of an act as Bernard Black.