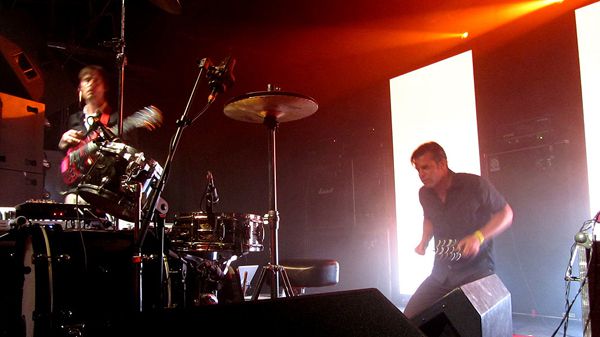 When Tyondai Braxton quit the band last year, Battles lost their most inventive composer, not to mention the alien vocalist of cult hit single ‘Atlas’. A combination of those vocals and the reputation of his solo work had made the multi-instrumentalist their most prominent member, and his absence left fans fearing an onrushing malaise. Their new, refreshed incarnation has met primarily with a chorus of relieved sighs – not only is their comeback album Gloss Drop an original and exciting piece of work, but their live show is more focused and dynamic than in its previous incarnation. The current touring setlist runs to little over an hour in duration, but there’s no short-changing afoot. Each member of the band has an accomplished and constantly involved role. As it is, there’s only so long a drummer as vigorous as John Stanier can continue playing – by the end of their set, he seems to have sweated out most of the fluid in his body. Cascades of the stuff soak the red carpet as his feet.

Battles’ new music might have fewer unpredictable lurches than were customary on their debut record, but the shift away from the leftfield is only by a small degree; no one should accuse them of oversimplifying. Stanier’s beats are as dense and syncopated as ever: he shatters numerous pairs of sticks (his rim shots in ‘Dominican Fade’ send splinters in all directions) and uses every break between frenzied drum patterns to tighten up the nuts on his snare. Still, his drumming is somehow the simplest part of the Battles setup. Multi-instrumentalists Dave Konopka and Ian Williams ramp up the intricacy of each track with looped textures. These well-practised sequences cast their guitars and keyboards as an additional rhythm section; often representing the heart of the music, their execution is awesome.

Even with the sporadic bloody violence of their music intact, what’s striking at the Trinity Centre is how much fun Battles are to watch. Putting older work aside, colourful tracks from Gloss Drop are enhanced and enlivened during a multimedia show. The vocal gap left by Braxton’s exit has been ably filled by a varied roster of guests, whose absences on the night facilitate a multimedia masterstroke. Their pre-recorded vocal takes are accompanied by projected videos in which they perform the vocals to camera. It’s certainly arresting to be faced by oversized visages of a yearning Kazu Makino or a frankly deranged Gary Numan staring out from the back of the stage, but techno producer Matias Aguayo’s appearance is the most memorable.

On driving single ‘Ice Cream’, his Spanish-language contribution is just another element – alongside powerhouse drumming and infectious repetitive guitar work – in the main body of the song. In an additional closing section, Williams produces an audio-visual remix of his vocals. Chopped into fragments and looped over Stanier’s drumming, the video of Aguayo leaps around simultaneously with his noises; an instant glitchy masterpiece, the coda amounts to a confirmation that Battles deserve their place at Warp Records.

It’s not clear how strictly regimented each song’s unfurling is – the fact their setlist is unaltered all tour suggests that the performance is stringently organised – but deviations from the structure of album tracks feel spontaneous and all the more entertaining for it. They might lack their leftfield talisman Braxton, but, in the live arena especially, Battles are now a force to be reckoned with.