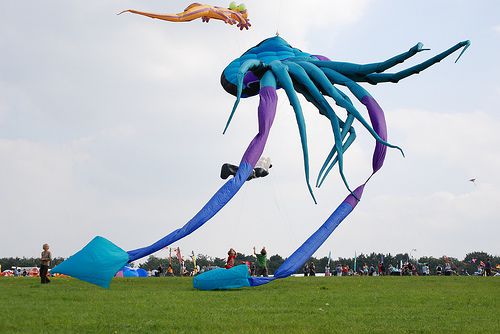 Kite guests from as far as America, Kuwait, New Zealand and Thailand will join flyers and enthusiasts from across Europe. The weekend will feature spectacular flying displays, kite fighting battles, breathtaking synchronised team routines flown to music and awesome power kites as well as colourful ground-based inflatables, banners, flags and air sculptures of all shapes and sizes. The Festival flying programme runs from to 11am to 5pm both days. To add to the festive atmosphere there will also be free children’s kite-making workshops, artistic banners and flags, fantastic play structures and selected specialist kite traders, a licensed bar and an array of food and drink concessions. This festival has teamed up with the Great Western Air Ambulance as its nominated charity. The charity’s helicopter will be on view at the festival (subject to emergency call outs) and fundraising activities will include parachuting teddy bears.

The latest contender for the World’s Largest Kite – a colossal flying Manta Ray – larger than a full-size football pitch, is set to make its first public appearance in the UK at the Bristol International Kite Festival over the weekend of 3&4 September. The Manta Ray was commissioned by the Al Farsi family of Kuwait from Peter Lynn Kites of New Zealand. The kite team will be travelling over especially from Kuwait to take part in the Festival. Subject to the right weather conditions on the day they will fly the Manta Ray and attempt to set a new official World Record. When laid out flat on the ground the Manta Ray has a wingspan of over 55m wide, a body length of over 40m and a tail of some 80m. To qualify for the World Record the kite will be officially measured in Bristol for the first time and is required to fly for a minimum of 20 minutes. Once inflated and airborne the Manta Ray requires two substantial anchor vehicles to tether it to the ground. The vehicles and drivers are being kindly provided by TCRA, a joint venture company between Tarmac and Churngold Recycling, which operates the adjacent Durnford Quarry near Ashton Court.