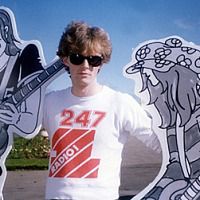 Back when The Pooh Sticks started in the 80s, their music, and also the name, was meant to be a bit of a dig at the more pathetic aspects of indie music. As they progressed, they became increasingly respected, although to say “taken seriously” might be pushing it. Now, in the age of the crap band name, could The Pooh Sticks once again be a tour de force?

The Globe had just been refurbished, so gone was the lovely old fashioned feel to the venue, instead a plainer, modern look. Upstairs on the balcony, the area had been smartened up considerably, with plush leather (or possibly faux leather) seats and glass tables. There were posh new bar prices to match, with a pint of San Miguel setting you back £4.20. But I shouldn’t be too cynical, the place did look good, it will just take a bit of getting used to. The best thing about the venue since the re-furb though is hugely improved acoustics. When The School, the first support band, took to the stage, they really did sound great.

The School played a similar set to the one I’d seen a couple of months before at Buffalo Lounge, with a mix of old and new songs, plus a Jonathan Richman cover to finish. I think it was possibly the best I’ve heard The School, with the new songs yet again sounding brilliant, although I was still slightly disappointed that again they didn’t play a couple of the songs off the album that I like and know the best, such as “I Want You Back” and “Let It Slip”.

Next up was Tender Trap, featuring Amelia Fletcher (who would also later join The Pooh Sticks on stage) and Rob Pursey formerly of indie favourites, Heavenly. After the lesson given in songwriting by The School, Tender Trap were a bit on the lame side, although with louder guitars, and so a rockier sound, they proved a better lead in for The Pooh Sticks. There was, I think, a strong Swansea contingent in the audience to greet their heroes, and in acknowledgement, it was not long before a placard depicting the words “Swansea Posh” was brought on, and then passed around the crowd. As a Cardiff City fan, I thought the best thing to do in order to enjoy the gig would be to not to rise to this, although I did decline to hold the placard when it was offered to me.

There were other placards, one that said “Drop Your Kecks” (a Pooh Sticks lyric), another in reference to the “Funny Early Ones”, and also one with the words “Indie Pop Extremists”. With these being waved about by various members of the band or the audience, plus a beach ball bouncing about, some kind of party atmosphere was created, albeit a bit of a silly one. And whether or not the band does want to be taken seriously, they’ve actually got a host of pretty decent songs, mostly taken either from “The Great White Wonder” or “Million Seller”. Highlights were “Who Loves You”, “The World Is Turning On” and “Young People”. If the last of these didn’t sound slightly dodgy when it was released with the refrain “Young people: They turn me on”, it certainly does now, being sung by an ageing singer, and a crowd of whom many were in their 40s, but hey, this is an indie gig, where everything is sweet and innocent isn’t it? Plus it’s irony, I feel like someone is begging to tell me!

The Pooh Sticks do power chords and the surf rock sound really well, and you can hear that they could well have been an influence on Teenage Fanclub, even though they usually cited Big Star, predecessors of The Pooh Sticks, and one of the originators of this sound. But before starting to imagine that they deserve to be included in the annals of rock history, or something ridiculous like that, remember this is also the band that gave us “I know someone who knows someone who knows Alan McGee quite well”, and “On Tape”. Although saying that, perhaps these two songs are in fact the reasons why The Pooh Sticks should be included!

“On Tape” is the closing song, a homage to the sometimes absurdly elitist nature of indie music, as singer Huw reminds us that he has The Pastels’ 1982 debut “Songs for Children”, and the “Head” soundtrack by The Monkees, along with other rarities on tape. Well, I don’t have either of these, but I do have “The World Is Turning On” by The Pooh Sticks on cassette single, and that’s pretty cool I think!
I didn’t think The Pooh Sticks could be better than The School, but somehow they managed it; in fact “blew them out of the water” was the phrased I used when chatting to someone outside afterwards. Further evidence that some good things can come out of Swansea.