A NEW KING OF PLYMOUTH IS CROWNED IN BREAKDANCING BATTLE 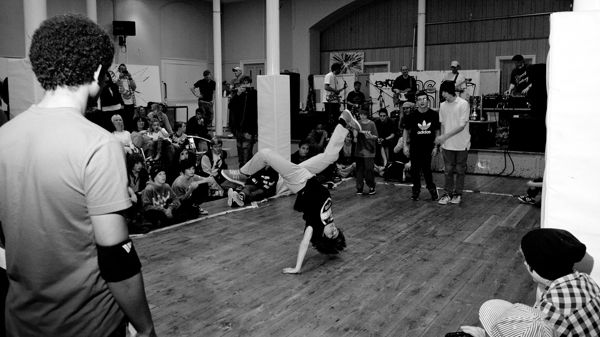 Dancers from all over the country descended on Plymouth on Saturday (October 29) for King of Plymouth, the South West’s top breakdancing battle. The event, organised by local breakers, Kit Thomas and Paddy Macgougan is in its 3rd year and took place at Mutley Baptist Church.

Over 300 spectators watched the 32 bboys battle it out until one was left, the new King of Plymouth, Bboy Spin, also known as David Gaviria from La Familia Crew in London. He beat former Plymouth Uni student, Enos, also known as David Hotton, who currently lives in Cardiff. This was Spin’s 3rd attempt at winning the crown, as he came 2nd to Exeter’s Bboy Bugz in 2009 and 2nd again to Bboy Marcio from Paris in 2010.

As well as the solo battle, there was an under 18s crew battle between Plymouth and Exeter, live graffiti and live funky hip hop from North Devon’s The Breaks Collective. Event host, Kit Thomas also shaved his head, after 4 years of hair growth, raising over £400 for the Dame Hannah Rogers Trust.

For videos, photos and discussions about the event, visit www.kingofplymouth.co.uk</strong>