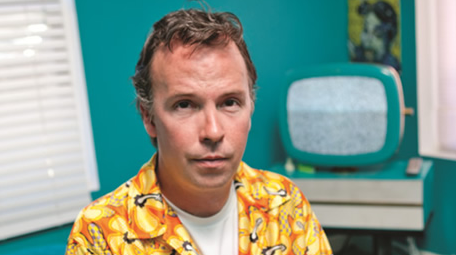 Doug Stanhope has been doing stand-up comedy for over 21 years. The American’s style ranges from “true-life” graphic perversion to volatile social critism”, but whatever he chooses, you can guarantee it will be an alcohol fuelled evening for both Doug and the audience. Before hitting the road, Doug took some jet-lagged time out to speak to Charlotte Gay about his upcoming tour.

Hello, how are you?
I’m not sure if I’m drunk or just over tired. Speaking of drunk, we need more ice and Schweppes bitter lemon. (After getting his drink) Right now we’re good, we’re cooking with gas as they say – no one says that, but I said it.

I’ve heard you really hate London – why do you hate it so much?
Yeah I hate London more than anywhere in the world. I’m just claustrophobic, it’s the same reason I hate New York, it’s just too many people crammed into too smaller place… overpriced… shitty… It’s terrifying.

What’s it like being an American Comic to a UK audience? What’s the reception usually like?
They’re a lot more polite. I don’t even think I like that. American audiences are as dumb as shit, they’re just clapping monguloids, screaming and yelling but you know they like you right away by their response. Here it’s like doing dinner theatre. You have to acclimate to the audience. You just think you’re dying on your ass, sweating bullets and everyone’s just staring at you blankly and at the end you get a standing ovation. Then you’re like why are you doing that now, why didn’t you show me you liked me during the show?

Gives you some confidence at least?
Yeah, they’re more polite people but I’m not accustomed to polite people.

Would you prefer it if people become hecklers?
Not over here because I usually don’t understand what the hell they’re saying! Yeah, you don’t know if they’re on your side or what. But they are smarter, definitely a smarter audience so it’s a challenge and it certainly makes you work harder – which I am not a fan of work!

You’re known for having a drink in your hand when you’re performing, do you have a particular ‘performance’ drink?
On stage I drink beer normally, just because I know how much alcohol is in it but at home or offstage, like right now, I’m drinking vodka because I like it. I like a mixed drink but you can’t do that on stage. You’ll be like ‘Gimmi a vodka soda’ and then they put 9 shots of vodka in it, and all of a sudden you can’t speak 30 minutes into an hour show.

Have you had that happen to you a lot then?
Yeah I’ve learnt not to do that now, but my fan base is very forgiving, my audience knows I am a reckless drunk, so if on some occasions I am too drunk to talk they think it’s funny. I could just go up on stage and soil my pants and vomit and I would get a standing ovation for it.

When was the last time you did a sober gig then?
The last one I remember was around 2003, it was like a mixed bill, I only had to do about 20 minutes and it was at a college. They weren’t drinking because they were only 18/19 years old. There is nothing worse than playing for a sober audience. I remember that show specifically going ‘wow I can’t remember the last time I did comedy without drinking’. Now I make sure that they can drink too!

Is that going to be the only requirement from an audience, make sure you’ve had a few drinks in before you get there?
There have been a few shows where I’ve walked out. There was a theatre, which I guess you would say was posh, they could drink before and afterwards out in the lobby, but they couldn’t have alcohol. So then I come out with three beers under my arm and a tub on stage and I realised after a few minutes – what’s wrong here – and then I realised no one is drinking and I’m just started handing out all my beers like some red cross going ‘Oh please someone, I can’t drink and you not!’

I’ve been on your site a few times and am I correct in seeing that you did a bit of paedo baiting after talking to people on chat rooms?
Yeah that was hilarious! Someone had a site where they had done it and after someone sent me a link, I never laughed harder in my life than reading that stuff. So I emailed them and said ‘Hey if I tried this would you put this on your site?’ and they said of course. It’s the only stuff I have ever done where I have laughed at my own shit.

A lot of people in the UK probably know you best from featuring on Charlie Brooker’s Screen Wipe, what British comics do you admire?
Now you’re just setting me up because I am going to forget one. Glenn Wool, but then he’s not even in the UK any more. Jim Jefferies, he was an Australian who I met in Edinburgh but he now lives in Los Angles – I’m missing England completely. Nick Doody – I dunno if I’ve ever seen Nick Doody’s set. Reginald Hunter is very funny. I’ll tell you who I hate.

Ok let’s go for the hate then…
Matt Kirshen, he’s a brilliant comedian but we had a personal falling out, where my girlfriend and Matt Kirshen… umm… well enough said. It almost came to a… well it did come to blows but it almost came to arrests. That was the last time I was here in August at the Leicester square theatre. I’m not a fighter, and he isn’t either but we were drunk and something happened and we got bloody and then the cops came. I think they let me go just because I am American and it was too much paperwork.
But if you wanna put out the olive branch, because I haven’t spoken to him since and it was really ugly. Matt, what happened between you and my girlfriend and our physical violence… I forgive you and I hope we can be friends again because he is a brilliant comic.

Would you watch yourself if you didn’t know who you were?
Oh fuck no!

Ah, that’s not the best promotional selling point now is it?
Nah I wouldn’t. I’ve been doing it for 21 years, I’m just kinda bored with it, and I’d rather see someone else. If you haven’t seen me for 21 years then yeah come to the show. Maybe you’ll be amused, me – I’m kind of tired of it.