THE LIBERTINES: THERE ARE NO INNOCENT BYSTANDERS SCREENINGS POSTPONED 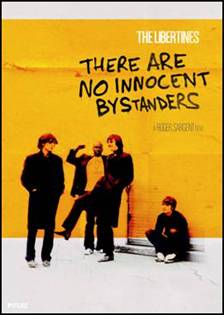 The film tour for The Libertines – There Are no Innocent Bystanders has been postponed. The tour which, was due to begin today, to take place in key cities at the O2 Academy venues, has been rescheduled to take place at the end of April 2012. The decision was taken as Roger Sargent, the band’s longstanding photographer and director of the film, was taken ill earlier this week. He was due to host Q&A sessions with the fans after each screening.

Sargent commented: “We are really disappointed to have to postpone the tour but I have tonsillitis and cannot do much talking at the moment! We are delighted to have been able to schedule later dates, so hopefully everyone who has bought tickets will still be able to come along in April / May and the fans will still have the chance to see the film in a live environment.”

These unique music venue screenings will still take place and we are pleased to announce a partnership with the local club nights to screen the films at their events. The dates will coincide with the general release of the film on DVD which is 30 April. Those who have bought tickets for the tour screenings will be offered entry into these events with a £2 refund on their original ticket price. They also have the opportunity of a full refund.

It means the Bristol O2 Academy screening will now take place on May 4 instead of tonight.