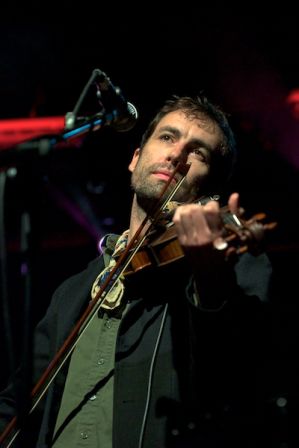 The back of the stage is festooned with a large, plastic, spinning gramophone – with a mascot monkey perched on top. Peculiar perhaps, but anyone accustomed to Andrew Bird’s singular, lustrous baroque pop immediately feels at home. Six albums into his fruitful upsurge of a solo career (Break It Yourself debuted at no. 10 on the Billboards), tonight Bird offers a truly assorted, partly retrograde set, and as he later intones on Desperation Breeds, one chock-a-block with “peculiar incantations”.

But first on strides a hirsute Mark Hamilton, of Canadian folk outfit Woodpigeon (clad in some kind of obfuscating head garment); a brilliant crimson acoustic-electric in hand, he begins to interlace echelons of guitar loops with his dulcet, hushed, velvety vocals which recall Sam Beam (Iron & Wine) and Sufjan Stevens at their most delicate. Usually flanked by a five-strong band, today he flies the flag alone, but with aplomb and expanse.

Hamilton’s set is for the most part gloomy in subject-matter. “Grey suits you too” he laments in what he labels “a love story about pirates”, a song concerning controversial Canadian PM Stephen Harper who, rather absurdly, purchased fighter jets to protect Northern Canada from pirates. Corruption reputedly lies within; he utters “fuck Stephen Harper” innumerable times. Another highlight comes courtesy of a ditty inspired by lost London landmark Postman’s Park, where the deaths of those who lost their lives trying to save others are described on the ‘Watts Memorial to Heroic Self-sacrifice’. The singer was principally moved by story of 12-year-old David Selves who tried to support his drowning friend but sank with him clasped in his arms. “It’s definitely a downer”, he quips. Indeed it is, but at last he cheers the room up with an amusingly adroit cover of a “Swedish folk song”, ‘Lay All Your Love On Me’ by ABBA.

After a short while, our headliner sidles on stage. It has to be said that a set like Bird’s should really be chaotic: an irregular, virtuosic polymath switching frenetically between whistling, singing, violin (bows, plucks and thrums) and guitar, incorporating all of calypso, blues and country. But of course, this virtuoso makes it work, proffering epochal, incandescent rock n roll. He starts sole, building loops of intricate pizzicato plucks. ‘Danse Carribe’ is a complex arrangement in which he moves from folky vibrato bows through tenacious thrumming to whistling soars and stark xylophone. This then segues into a down-tempo jazzy cut. In fact, his entire set is marked by the way in which he assuredly, instantaneously flickers from brazenly pouring out emotion to purveying an intrinsic, insouciant ‘cool’. When his backing band ascends for the calypso swing of ‘Night Duty’ we’re already in thrall.

Following the lightning-fast, labyrinthine plucks and slinking bass grooves of the super-melodic ‘Desperation Breeds’, we get ‘Orpheo Looks Back’, a new tune which alternates between Latin-ish offbeat thumps and folky violin solos. Harmonically, the chorus would slot nicely into Paul Simon’s Graceland. Next up, ‘Measuring Cups’, lifted from Bird’s early The Mystery Production Of Eggs, is a welcome inclusion in which, alongside anthemic single ‘Break It Yourself’, the agreeable whimsy of his lyrics recalls Oh, Inverted World-era the Shins. The second witty cover of the evening comes as a bona fide delight: ‘It’s Not Easy Being Green’ by Kermit. Yes, really… Bird and band transform it into an enchanting blues ballad with polished violin flourishes and winning bass-lines.

Earlier this afternoon, Bird treated fans to in an intimate warm-up at Rise record store on Queen’s Road. There he showcased his “old timey set-up”, something he repeats in the encore tonight. He and his two guitarists assemble around one microphone and rattle through a couple of country and western classics and ‘Give It Away’. The latter, along with a Townes Van Zandt cover, culminate an evening of captivating, gratifying musical confusion.