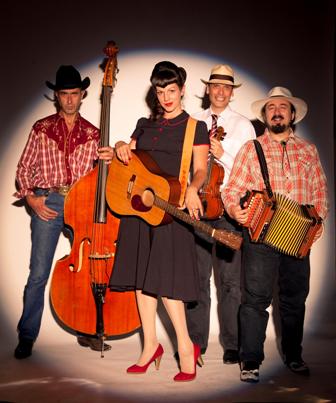 The Bath Americana Festival launches its Appalachian-flavoured acoustic extravaganza at the celebrated American Museum in Britain on Wednesday 4 July.

The 2011 festival saw audiences bopping to the bounce and lilt of fiddles and 5-string banjos and tapping toes to clog-dancers and organisers hope to build on this success adding the styles of Cajun, Rockabilly, Swing and Ceilidh to create five dance-filled days celebrating the diversity of American folk music.

The musical styles falling under the Americana umbrella draw their inspiration from the folk heritage of the British Isles but combine strong influences from France and Germany to add to its diversity. Throw all of these elements, including rants, reels, strathspeys and polkas, into the melting pot and you come up with a musical generalisation popularly known as ‘country’ or ‘hillbilly’ or more widely know as ‘Appalachian’.

This year’s festival, which runs from the 4 – 8 July, will play host to a wide range of artists. Highlights include an Independence Day picnic at the American Museum on the 4th of July featuring the Sharps & Flats, a new-generation ‘boy band’ with bluegrass and old-timey overtones, and the Buffalo Gals, who include everything from wild fiddling and clawhammer banjo picking, to Appalachian clogging. Bring a picnic rug or some chairs and sit back and enjoy an evening of pure heritage music, food and fun in the great outdoors of rural Claverton Down.

Artistic director Bryan Chalker said “Last year’s Americana Festival was a bold experiment in exploiting strands of folk music new to Bath but each one of them steeped in our rich heritage”. He added ”it’s a measure of last year’s success that we have been inundated with calls and emails from artists around the world eager to perform at Bath’s Americana Festival in the future”.

There is a serious side to this music when it comes to preserving ancient sounds and songs but much of what you will hear has been described as ‘blue-collar folk music’; country blues, laments, hymns, fun songs and honky-tonk dance tunes of the working man. Artistic Director Bryan Chalker said “It’s more than fitting that this World Heritage Site should play host once again to a magnificent pot-pourri of hallowed sounds from the musical Americas because, in a sense, we are simply bringing them back home! The City of Bath has a proud history of embracing the arts in all of their varied forms and these delicious Appalachian and Arcadian threads will add a fresh dimension to past pleasures”.