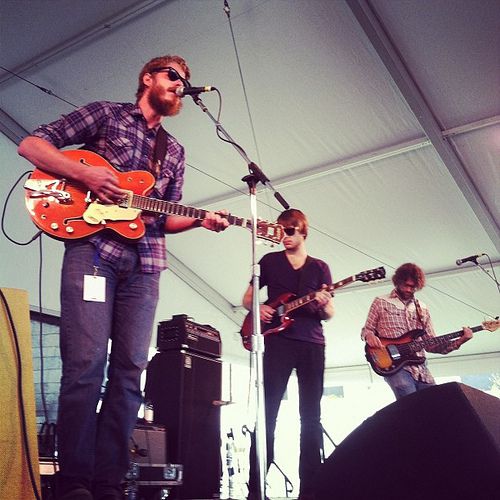 Almost sneaking on stage to start up without any introduction, a furrow-browed Ryan Boldt, a Hammond organ and a collection of unkempt beards and vintage western shirts suggested this was going to be a night for ‘real/serious’ music; and a few extended jams with self-approving nods fitted that bill, but it wasn’t long before an over-excited elderly fan was cheekily asked to fan them down (the lack of any kind of air flow means St Bonaventure’s Club isn’t the kindest for a rock’n’roll outfit). This kind of unexpected light humour punctuated the night’s proceedings, and contrasted well to break up the band’s more solemn lyrics and slide guitar heavy sound.

The band drew heavily from acclaimed new collection ‘The Place I Left Behind’, but did return to earlier albums to play a few happier songs, such as ‘Two Time Loser’ (upbeat musically at least), but these divergences came with the provision that we’d have to then return to the “depressing stuff.” It would be easy to dismiss the band as downbeat, taking them on lyrics alone – loneliness, lost love, moving on and lack of money are seemingly covered in every song, as is the word ‘blues’, which they just can’t seem to lose – but through Ryan Boldt’s commanding yet still gentle tones, they have a warmth that can’t fail to move, more overcoming than overbearing. The opening line of The Banks Of The Leopold Canal: “Time is ticking, my love, can no longer stay,” would have seen the hairs on the back of my neck stand on end, had the temperature dropped below 40 degrees.

The Canadian band, replete with Rumours-period Lindsey Buckingham lookalike, are clearly well schooled in their dated sound and play with the requisite appreciation for their Americana influences – the one new, unnamed song sounded like it had been lifted from an early Lynyrd Skynyrd album while forward-thinking reached as far as a few Pink Floyd circa 1973 deviations. It may not be very original but in an age of the acceptable ‘sell out’ and unabashed greed, it’s comforting that there are still bands playing with this much heart simply for the love of the music, and still gaining enough success without compromise to tour overseas so this reviewer gets a little metaphoric hug and reassurance that despite Jessie J et al, there’s still a little hope.