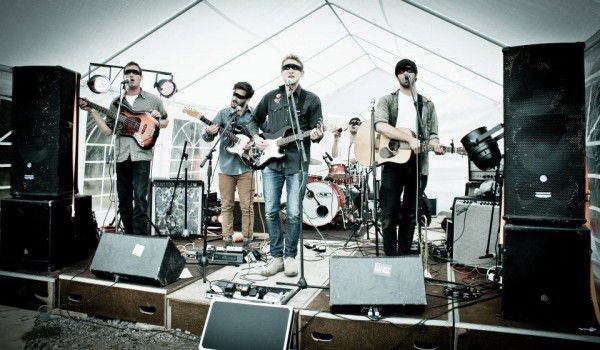 Everywhere you turn these days there seems to be a new festival popping up. It’s big business and while the behemoths of the festival world struggle to sell out the smaller, boutique festivals are thriving. And it doesn’t get much smaller than this. A 499-capacity even in the beautiful Dorset countryside with a very noble aim – to raise money for charity. And while a lot of charity gigs comprise dull local bands, branded balloons and naff fundraising efforts this was in a class of its own.

With the ‘ticket’ being a £15 donation to charity (and you knew it was going straight to the charity, as you donated via Just Giving), this three-day event cost less than your average gig yet had with more than 20 bands on the bill as well as the massively underrated headliner David Ford, whom you’d pay that fee to see alone. Bargain. Camping/parking was an extra tenner in the charity pot and there was a brilliant array of local ales, ciders and homemade food as well as some delicious cakes on sale as part of the Macmillan World’s Biggest Coffee Morning. Add in some crockery smashing, a tense art auction and some of the best face painting I’ve ever seen and you’ve got yourself a top little festival.

Opening the musical proceedings on the Friday night was Powdered Cows. The Bournemouth-based two piece eased us into the evening with its Blur inspired easy-on-the-ears indie; intelligent music which you should file next to Grandaddy. Next up was the dreamy Tom Caulfield, whose solo acoustic numbers hit the spot. Here is a man who wears his influences on his sleeve (Bob Dylan, Neil Young and Bruce Springsteen, who he honoured with a cover). The evening also saw Londoner Mat Motte play a set of energetic rap-infused numbers and Wimborne youngsters and rebel rousers Vlad belt out some Radiohead-esque indie.

But Friday night belonged to Bristol’s favourite psychedelic indie troupe Schnauser whose infectious music got the party well and truly started. It was smiles alround as they treated us to their hilarious lyrics and perfectly excecuted sounds, which had more than a sniff of The Beatles about them. Brilliant it was. With everyone clearly struggling to contain their dancing feet, DJ Iggy B took to the decks to spin a crowd pleasing set of legitimate indie old and new and guilty pleasures. It was then the turn of Bristol’s Tim Ellis, who DJs at Spillers in Cardiff on Record Store Day, to bring out the Britpop – and that’s exactly what he did, which had people throwing shapes til the early hours.

Saturday got off to a great start with Bristol’s Squeeze Me Macaroni playing to a small, but appreciative crowd. Sat on a stool, carving loud soundscapes from her sparkly blue guitar was just what the hangover doctor ordered. There was a definite Bristol flavour to this festival (despite it  clashing with Brisfest) and among the Bristolians who played was the theatrical and delicous Von Bartha, the dark and effortlessly cool Scarlet Rascal and the Trainwreck, the brilliant and much-hyped Empty Pools and Goan Dogs. The latter, complete with matching black painted stripes across their eyes, nailed a set of whoozt desert rock and gained a hoard of new fans. As did their predecessors.

Dorset’s Jinder performed a half music/half comedy set full of amusing anecdotes and swear words – much to the amusement of his young daughter who was in the audience. But as amusing as his banter was, it was his songs which stole the show. husky-toned, easy listening ballads – which would not be out of place on an indie British rom com. With sniffs of Townes Van Zandt and even Michael Kiwanuka this was a perfect soundtrack to a sunny autumn afternoon. Another Dorset act walking the boards was Escapefrom98, who, as the name suggests, harness all that raw energy demonstrated by Green Day, Blink 182 and co in the late 90s. Rolling around the stage and having a blast, they went down a treat.

Cover bands are always a tricky sell at a festival, but Thrill Collins and Mother Ukers aren’t your ordinary covers band. Each have a USP which made them one of the highlights for many people at this festival. The former, a Gloucestershire skiffle trio – treated us to some Backstreat Boys and a new Whitney Houston cover which exceeded the original. The latter used their ukes of varying sizes to rattle through some wonderful wee covers too. Not quite a covers band, but commanding the same response was Disco’s Out (Murder’s In), festival favourites up there with the likes of Smerins Anti Social Club and Babyhead. Definitely ones to watch.

Northampton’s My First Tooth treated us to some old favourites, such as ‘Sleet & Snow’ as well as some newer material – which is heading off in a totally different direction to the folk-tinged, upbeat ballads we’ve come to love them for. But this ain’t necessarily a bad thing. Their playing is tighter than ever and the crowd lapped up the hoe-down element of the set. They paved the way for a couple of solo slots at the top (not Chris T-T as billed, but One Man Destruction Show, a worthy replacement).

David Ford is one of those underground heroes. Once you’ve seen him play live, you’re pretty much guaranteed to love the guy – but he’s a long way from the mainstream and genuinely remains a hidden gem of the UK music scene. Interestingly, he’s far more popular in the States. Anyhow, the way he loops his instruments and vocals to build layer on layer to a crescendo is marvellous. His tear-inducing set, which started around 11pm, included the songs ‘Panic’ and ‘I’m Alright Now’ and he even threw in a mini and impromptu sounding cover of AC/DC. It’s only a shame not more people had have stuck around to see him.

The final offering was in the shape of the equally talented One Man Destruction Show – who somehow, single handedly manages to command the drums, guitar, harmonica, vocals and even maracas to create a massive sounding array of rockabilly-tinged songs. Songs with hints of punk, indie and folk about them and songs, which once you’ve gotten past just how amazing this dude is, are actually pretty good in their own right. Another underrated musician nailing a set at this lil festival.

So the verdict – a cracking little festival which has the added feelgood factor of raising thousands of pounds for charity!