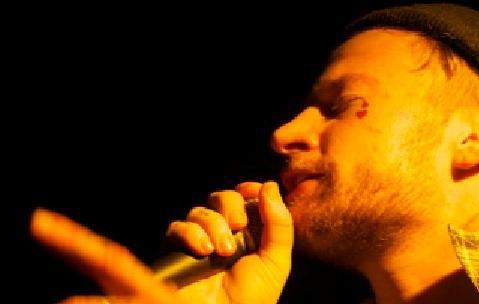 Craig, an ex-member of popular hardcore/screamo bands Emarosa and Dance Gavin Dance, started off by promising a stripped down set – ‘no bands, no baggage, just room for singing’. What this actually meant was him singing to backing tracks of his solo work as his ‘supporting band’ pressed play on a MacBook and actively checked their phone for the first four tracks.

Prior to Craig jumping on stage he was very social and engaged with the crowd. He signed autographs, took pictures and generally thanked people for their support, but when he was on stage he looked anxious and uncomfortable, like he wanted to jump back down and talk to everyone instead.

Tracks from his solo album, ‘A Dream is a Question You Don’t Know How to Answer’, played over the speakers, but Craig did not want to sing them. His voice, which is lauded to be one of the best among hardcore singers, not too heavy on screaming or high pitched whining, was on form but it lacked emotion and direction. He hit all the notes and moved with the crowd but his stage presence was hollow.

The crowd’s disappointment was obvious, but it was interesting to watch this artist, who supposedly cares so much about his fans, drag himself through the heckling and shouts and attempt to sing. Much of this animosity towards Craig was warranted, as songs were stopped and started repeatedly and cut very short. At one point Craig turned towards the crowd asking them to sing along with him, but the response was deemed insufficient and the track was promptly cut short. The second half of the 45 minute set involved Craig’s supporting DJ grabbing a guitar and accompanying him on a few new tracks, which he quickly revealed were ‘just freestylins’.

Craig has gone through numerous trials and controversies during his time as an artist, including addiction and relapse; however, many fans saw this as an opportunity to finally share their love with this artist but were left massively disappointed and quick to turn on their tattooed icon.